I tested the tactic in my English Testing League where Leicester have a media prediction of 7th out of the 8 teams, I finished the league in 3rd place behind Liverpool and Man Utd but ahead of both Chelsea and Man City, Vardy had the most goals in the league and Albrighton had the most assists. 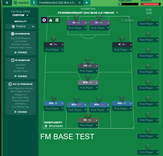