Defending:- The BPD duo will collect the ball from SK and try to play out from defence carefully to the CWB or more directly to DLP or SS to launch the attack. The CWB will spearhead into the attack to launch deadly crosses from deep or byline as IWs upfront will cut inside to leave them space. The basic instruction of waiting got he CWB to arrive will get more chances creation from the CWBs

Mid:- The DLP for launching deadly direct passing counter-attacks or simple pass to inward running IW form the left. The BWM is the main guy for regaining possession and suddenly launching the Counters. He gets the ball to give it to DLP or Inward running Iw form the right and sometimes supports the attack if not struck in deep. The IWs will cut inside dribbling their way to help create or attack or have a go at goal if chances are given are always ready for the ball from DLP, BWM (shorter) CWB, BPD ( Direct). They also create chances for DLF and SS who are upfront waiting.

The DLF in support role partnered with SS(attack) is really a fruitful combo. The SS(attack) dribbles more getting the ball from IWs, DLP and BWM will try to get past and score for himself. The DLF in support roles receives the ball from crosses CWB to score or set it up from IWs from both wings and deadly SS waiting in the box. DLF also takes more risk in bringing SS into the attack. 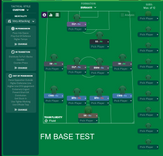