I wanted to create a playstyle of fast paced combinations while still enabling deadly counterattacks. This tactics chief players will be your wingbacks and advanced forwards, stretching the play and creating space for other players to use. The midfield consists of three very offensive roles while still offering strong pressing and a flexible defense, which can be vulnerable to long passes. I don't do OIs, set piece takers are flexible as well, corners and freekicks are shot towards the near post because that worked best for me. Just be careful with leaving enough protection on corners when you adjust the taker. I managed to finish second in Bundesliga twice with Eintracht Frankfurt, Fabio Silva reaching 70 goals, my buddy managed to beat mme to the title with Bayern Munich though. I reached the CL Final in my second season, knocking out Man City and Bayern Munich on the way, finally losing to Liverpool by a heartbreaking goal of Divock Origi in the 121. Minute and sealing the 4-3 win of Liverpool. I won the DFB Pokal twice in a row. 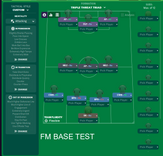