What to expect? Well you will almost always have more possesion and completed passes than the opposition. This after all a tiki-taka tactic with elements of gengen pressing. Set piece takers? Use the mezzala or the winger. Remember left winger on right corners, right winger on left corners. Why this way? Well I am using pure wingers and not IF or IW. Basicly remember one important rule: right footed player on left corner taking duties! and left footed player on right corner taking duties! Opposition Instructions ? They depend heavily on the opposing team. If the team is weaker no instructions what so ever. If they are better: Look for the recycling retriver on the opposition team. He will be DP(S,D), HB, DM etc. The guy who holds position between defence and midfield. Set "Always press" and "show on to weaker foot". For central forwards: If they are pace type e.g. AF set tight marking on never. If they are strength type eg. TM no instuctons. If they are strong, pacy, have good finishing and good passing just get Virgil van Dijk ;). JK Get the best CD you can. Player Instructions? For the Mezzala "hard tackling";For the pressing forward "roam from position". Important: for much better sides than you set both wingers on "tight marking" and to "man mark" oppostion wing backs. This only applies for the top divisions only and for the best sides like Liverpool, Man Utd, Byern Munich, PSG, Barca etc...(this is not my idea I have seen other players use it, I have seen streamers use it, but it works great with my tactic.) Recommended players? Recommended attributes per position? For Half back Declan Rice is the ideal option, but agian get the best you can find. For the CB get the best you can in this position. It is the most important position in the tactic. Ideally he will have high jumping range, heading, marking, concentration, composure and pace. For the rest: Just look for the attributes which the roles show as key and secondary. Do not go into too much detail. Any specific training ? Not Really. Just be sure to put the occaisonal set piece training, but only becuase assistant never does it. Footedness of player per position? self explanatory: Left wing back left foot, Right wing back right foot. The same for wingers. For the mezzala if he is right foot put him on the left side, if he is left footed in the right side. The rest don't really matter. Top scoring position ? The pressing forward, but this is not always true. Sometimes the wingers might outscore him. On finishing note you can train the trait cuts inside from both wings on the wingers if the have good finishing. Also if the half back has the trait "gets furhter forward" or something similiar make sure to remove it or just get someone else. 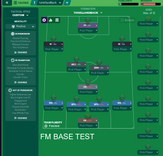