Theta has the additional defensive coverage by playing a DM rather than a 3rd AM and allows for the 3 DCs to stay back vs the Libero on the Omega.

Like with Omega the IWBs act as "Diagonal B2B midfielders" but i've assigned "Get further forward" on their individual instructions to add numbers when they get forward on attack & quite often are on the end of through balls into the box. My IWB scored vs both Man City & Barcelona in the same week!

I use this formation when coming up against stronger teams. 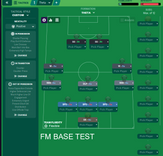