Man City - A brilliant treble, not quite the same one that they could win this season but very close and perhaps a sign of things to come? Premier League in the bag though very close run thing as Liverpool were only 2 points off us, some good goal scoring exploits by KDB and Aguero though seal the title as well as an FA Cup and the Champion's League, Hoo-rah!

FC Lorient - So amazingly we have a Ligue 1 win and NOT with PSG, our 20th predicted underdog has risen up and destroyed the league to win it, barely dropping a point to a tally of 101! Just wow!

Wolfsburg - okay so not as amazing as Lorient but a nice second place, solid season with a lot of goals scored, setting up a nice second season within the Champion's league, though the league escaped us there is an epic win in the German Pokal Cup, get in!

FC Emmen - A very good season, predicted 14th and overachieving into 2nd, maybe a bit more luck and could have won the league but let's not get too greedy we have done well here. Runners up also in the cup, we would hope to challenge again next season.

Blackpool - I'm going to call this an annihilation of the league, 40 wins and 124 points in total with 143 scored, this is just phenomenal especially when predicted 10th, Papa John's Trophy also won so double silverware and a promising outlook for season 2.

So a lot of silverware, a lot of goals, and a lot of points. Work with this well and damn you'll be winning a lot too! 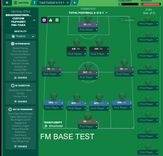