this is my first uploaded tactic and i just want to share it, because it is a very unique one with a rarely used very attacking mentality and maybe not that common roles like IWBs or IFS. I just did it for fun in my primary save as a 2nd Manager to help some teams (I like) reaching their goals for a short period of time. In this case I took over Dynamo Dresden in the 3rd german league. They were predicted 3rd, i took them over situated 10th and then the story starts with 14 wins out of 17 games and I didnt even look at the team in detail when creating the tactic. So it was a little bit coincidence to be honest :D

Why does the tactic look like it does? I was born at '86 so I was witnessing those glorious times Werder Bremen ruled the bundesliga and has had some magic nights in europe. Their playing style was like hara-kiri, they just played very offensive and results like 4-3, 5-2 or even 7-3 have been normal in these times. So I wondered if it is possible to create a tactic with lots of goals on both sides, with the happy end on my side as often as possible :D In last FM i was not able to do it because strikers were useless in 1vs1's, but this engine here seems to be better for that playing style.

Maybe u try it out and maybe it works with other teams as well. I cannot guarantee it. Just wanted to share it because it is lots of fun in my save and who does not like exciting games with lots of goals on both sides?? ;)

Here just one example of a game, it was the game with most goals in 3rd league history and like the 4th game with that tactics. The opponent was mid table. Maybe the direction of passes and the xG visualization is interesting for you. Attachment 1608571506045.png

The best defense is offense: agressive 433 here with various goalscorers 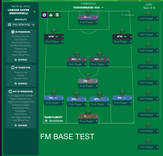