This is the first tactic i've tested and i wanted to try something new rather than the classic 4-2-3-1 gegenpress but don't really want to stake my save on it.

I'm hoping that forcing attackers inside whilst playing with 3 dms is going to create very little attacking opportunity for the opposition and allow quick distribution to the front 3 for counter attacks. I'm not 100% sure about using attacking as the mentality for this formation but i thought it's worth giving it a try.

I also think i may need to include distribute to center backs and focus play up the middle but in the end chose not to include them to allow for a little more freedom.

I haven't added any non role-specified player instructions as i haven't tested the tactic out yet but depending on how the test goes i may change this.

I'm also not 100% sure about using a half back as i've never used the role before and have no idea whether its any good, if its not its easy enough to switch up to a better role! 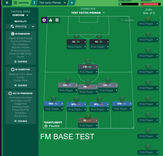