Strikerless tactic. Got ideas from other strikerless tactics such as tight marking, pressing, hard tackling wingers and CBs who take no risks. I could not get Shadow Strikers working so I went to a flat 5 for a laugh and somehow it worked.

Predicted lower half of table with Crystal Palace after finishing 3rd previous season (in 2094, long save...). Won the Prem & Champions League.

At least the middle MC needs to be a retrained striker so they can get goals. He is the main goal scoring threat, but does get tired in this tactic. The Defensive Wingers also tend to get tired so I give them some endurance training.

I often have to switch to attacking if the other team is keeping possession. Also add More Be More Expressive if they are parking the bus. 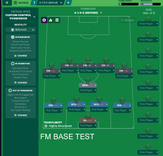