Zdenek Zeman has always been one of my greatest coaching heroes. This is, by no means, a Zemanlandia, but there are definitely Zemanian hints as his thought is part of my tactical DNA.

Just like the mighty Czech, I am in favor of a 4-3-3 formation, which covers the pitch best. Zeman usually calls it a "geometric" formation.

If you look closer, however, you can easily spot influences of Guardiola and Klopp here as well, so it's definitely a modern take on tactics.

THE STORY OF SUCCESS

Well, I never really manage big teams. I've had moderate success with Sanliurfaspor in Turkey, but always struggled to get promoted to the highest division, having been defeated in the play-offs four times straight. Once I got a job offer from Caykur Rizespor from the Super League, I decided to move. Rizespor were 16th and I managed to lift them to 11th position in half a year. Next season, I dominated the league with this tactic, noting runs like 10 matches without conceding a single goal. I beat all the big names like Besiktas, Fenerbahce and Trabzonspor on the way.

Just like I said, this is a geometric, wide 4-3-3 formation with an attacking mentality (a Zemanian influence). It started off as a tiki-taka-ish tactic (hence the name Rizetaka), but ended up being more of a modern gegenpress one.

Even though we have a team instruction dribble less, our full backs and inside forwards are in fact one of the best dribblers in the league. It doesn't stop them, it just limits the poor ones and favors passing.

Most dribbles in the league even though we dribble less:

The goalkeeper is - to my surprise - a regular goalie, not a modern Sweeper Keeper that I usually use. The defensive line is standard, not high or very high, as in FM 2021 this is what works best for me. We also don't use the offside trap.

However, as it's an attacking formation, the defence is in fact quite adventurous. My full backs (FB (A) being one of my favorite roles) are very attacking and provide offensive runs and key passes. In fact Diogo Lopes, my right back, had most assists in the team:

The central defenders should be able to play comfortably with ball at their feet. They are - in fact - the deepest playmakers. The defenders also contain space in the middle, forcing the opponents to play wide. It's good if your central defenders are good in the air, as you're going to need to win those headers.

We mark tightly, but we don't get stuck in.

The central character of this attacking tactic is in fact a... deep-lying playmaker. Yes! He has the most touches, most created chances, most key passes, etc. He is the most important, focal point of the team. Make sure he is great! For us, it was Miguel Luis:

As you can see, a very intelligent, overall good player. This is what you need. Good passing, vision, anticipation, decisions and teamwork. He is the brains of the team. The legs are on the wings.

Next to the DLP, we have a Mezzala. I used to play two playmakers, this one being an AP, but Mezalla worked better. To be honest, I think this can be improved. I was not really satisfied with Ribeiro's performance. Though, it might just be the case of a given player.

Behind the two, we have a half back. I used to play an Anchor Man, as I thought he would move horizontally and cover the flanks, but it seems an HB works better. He drops deep while the centre-backs drift wider.

If you're into Argentinian football history, you've probably heard the name Manuel Seoane. He used to be one of the best players of the 1920s and 1930s and became famous for playing as a deep-lying forward in a V-shaped front line.

The V-shaped line was a tactical innovation back then and made Independiente a superpower. In a V-shaped front line, the central forward was not the furthest player on the pitch, but played a bit behind the wingers and inside forwards.

In Rizetaka, Damir Ceter Valencia played a bit like Seoane. The inside forwards moved to the center, full backs were effectively wingers, and Valencia dropped deep. In some situations it was a V-shaped, and in some - an M-shaped front line.

However, the role of the DLP here is different from a False Nine (which I used before), as a DLP is more of a powerful player, with good heading, athleticism and a decent pass. F9 is more a Messi-like guy.

The main threat, however, comes from the wings. There, as Inside Forwards, you need people who are as fast as lightning. Forget finishing - SPEED KILLS! My Inside Forward with finishing 6 (!) scored 19 goals:

Attachment Fikret Kılıç_ Profile.png The other one was equally godlike:

This is my best FM 2021 tactic, however it can be improved. For example, I completely ignored set pieces. And - I still need to think about that mezzala role. Still, it's amazing enough to win you a gold medal while managing an underdog. 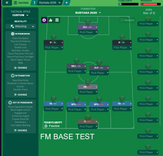