After a bunch of testing, I'm releasing my version of the strikerless 21.4 tactics. While the work is original, this is heavily influenced and in part based on the ZaZ Red/Blue/Cyan and Phoenix series. My main intention was to create a tactic with less variance and an even stronger setup against good teams.

With 62 wins in a 40 team/80 game test league, this has produced the best result I've seen since the release of FM21.

My suggestions for underdog teams: 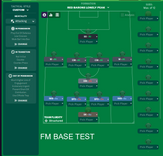