Here's a video with a breakdown.

6 months into my save in League One, I was threatened with the sack and given a month to sort it out, i had been using one of FM's own tactics.

Something had to change, I wanted to create something that I felt encapsulated the club that I was managing, Sunderland.

A blood and thunder type tactic which made sure the players gave everything they had. With that in mind Pressing was wacked way up and the Rabid Underdog was built from there.

We managed to go up through the play offs and after a window of bringing more suited players into the formation we havent looked back.

Being promoted in our first season and then gaining 4th in the premier league when we were favourites to go down in both campaigns.

To do so with primarily average championship players, I though, was a great achievement.

The main points to the tactic is that the wingers will be sprinting all game, so if they are not supremem atheletes, you will need subs on the bench for the second half.

The advanced forward should be quick as he will find himself behind the oppositions defence regularly.

Any questions, give me a shout. Happy FM'ing. 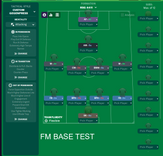