I built this tactic because I wanted to score goals. Lots of them. I also wanted huge amounts of pitch coverage and not to be wide open in defence.

This extract from the blog post I wrote (available through the more information tab) about building the tactic outlines the final version as it shifted from a system with three attacking midfielders, to two deep defensive midfielders, to what we have now.

This tactic achieves the coverage of the pitch. The roles of the wide players (wings and fullbacks) were vital to achieving this. Starting them inside and then asking them to move out would not achieve the coverage I wanted. Starting them wide but playing narrow, gave me the coverage I wanted. The striker role changed to a poacher because all I wanted or needed was a player who would be in scoring positions. This could have been a target man, but the poacher role worked slightly better in game. A key change was shifting the full backs into inverted wing backs. I decided to bring the Mez back in, so felt I needed the inverted wing backs to give protection to the central defenders. Little did I know that this change would have even more of an impact than I had anticipated. With the two central midfielders the Mez would have the freedom to help in attack with the central midfielder being locked into a deeper, screening and recycling role. This would mean that when high position had been established on the pitch the team would have four players absolutely committed to attack (poacher, wingers and advanced playmaker) with the Mezzala joining constantly and one of the inverted wing backs joining most of the time. On some occasions both would join. The team attacked with a minimum of six players, sometimes with seven, leaving four or three back. There was also an easy switch available, putting both inverted wing backs into a defensive role, meaning we could keep five players close to the half way line. Attacking with a minimum of six players links with the ideas of Dan Micciche, who was instrumental in the success of the England youth teams in the famous summer of 2017. Playing narrow was perfect. When possession was lost we could counter press easily (in line with the philosophy of Julian Nagielsmann) but it also meant that those wide players did as I wanted, playing like additional strikers. The Mezzala did not get in the box quite like I had wanted, but he didn’t need to. He helped overload the defensive midfielders and became a supplier of assists to Haaland, who was dominant in front of goal.

In the screenshots I have included what Haaland has done after 3 and a bit seasons. 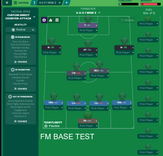