It builds up with the LB tucking in to create a back 3. This is inspired by the role of Sinkgraven at Bayer Leverkusen.

The midfield is comprised of a single pivot (Aranguiz) with two 8's playing in the half spaces inspired by the roles of Brandt and Havertz.

The tactic will build out from the back and then gradually become more direct as play moves towards the final third in order to find space in the oppositions defence. 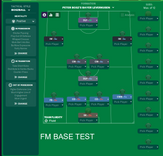