<size 3="3">The idea behind this tactical system is to play a possession orientated game. with a midfield general providing a solid base, flanked by two Mezzala's who have the freedom to roam and attack the half-spaces whilst the Enganche sits in the hole pulling the strings. The forwards are an F9 who will drop into space dragging defenders out of position whilst the CF is tasked with doing it all, he can run in behind to exploit the space left by the counter-movements from the F9 or he can drop deeper to link the play when required. These movements are critical to the success of the Enganche as he is the static pivot that needs movement and options around him to unlock defences. The Enganche is an Argentinian footballing term, which is used to describe a traditional playmaker/attacking midfielder; a no,10. A predominant role within South America, the Enganche is usually deployed in the hole the space between the midfield and attack.

The Enganche typically possesses the vision and an eye for a pass, allowing teammates further forward (who are either in space or making a darting run in order to penetrate opposition lines), can be picked out effortlessly. Having these two specific qualities also means that possession is kept efficiently in advanced areas of the pitch, rather than being lost due to an ineffective pass. Ball control and retention are necessities, in order to be able to receive passes with ease and continue attacks.

The 4-3-1-2 formation was a popular system in Argentina in the 1980s and more recently it was used by Carlo Ancelotti's Milan side of the 2000s. It must be said just because the formation is narrow does not mean they will be no width in the attack as the fullbacks will get forward to support play providing an outlet where needed. 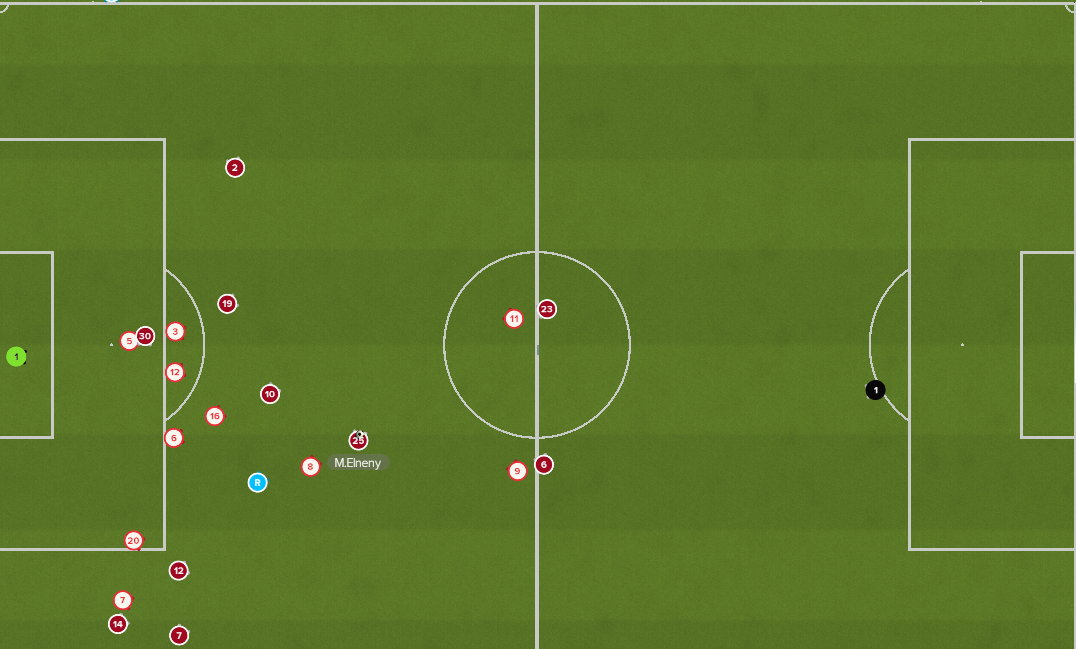 However, the main aim of this formation is to dominate the central zone of the pitch with 3 central midfielders and the Cam combining to outnumber the opponent's central midfielders allowing for greater possession of the ball. Due to play being focused through the middle it is important that there is a strong understanding between the defence and the CM. As once the ball is won in the defensive phase, the outlet is usually to the three-person midfield, as opposed to finding the wide players for quick counter-attacks. 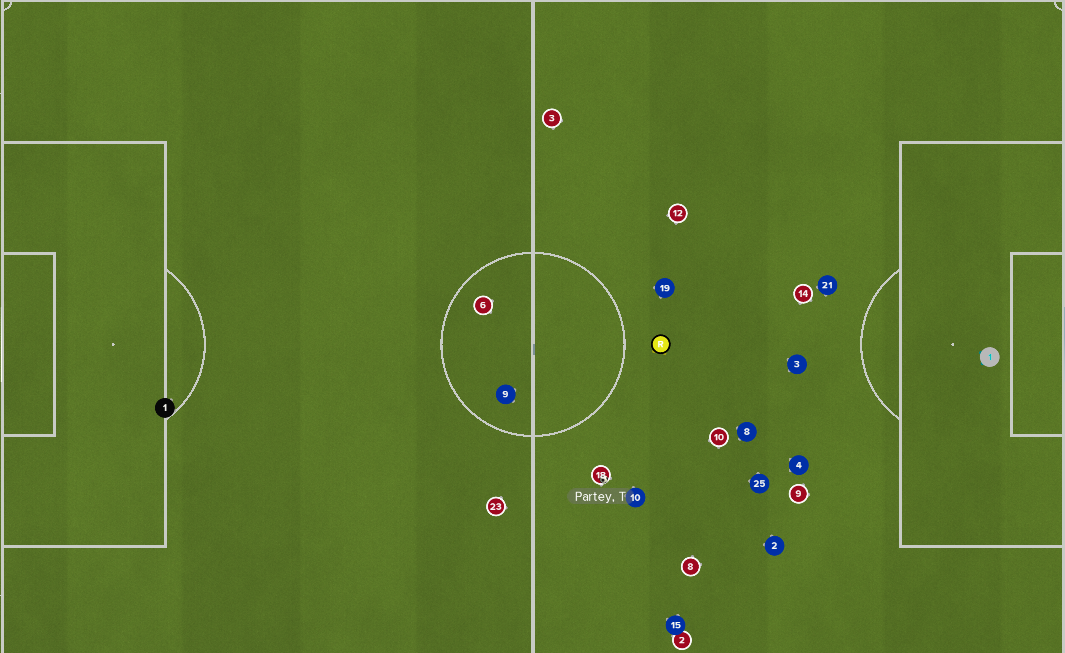 The perfect attack would start with the CM finding a striker (RS or LS) who can then drop the ball at the feet of the CAM in and around the box. Once that ball is played the striker then makes a cutting run either to receive the ball or create space for the other striker. Space is created by the defence having to press the Cam or following the striker's movements. If done correctly these countermovements create a lethal combination for the defence to deal with. 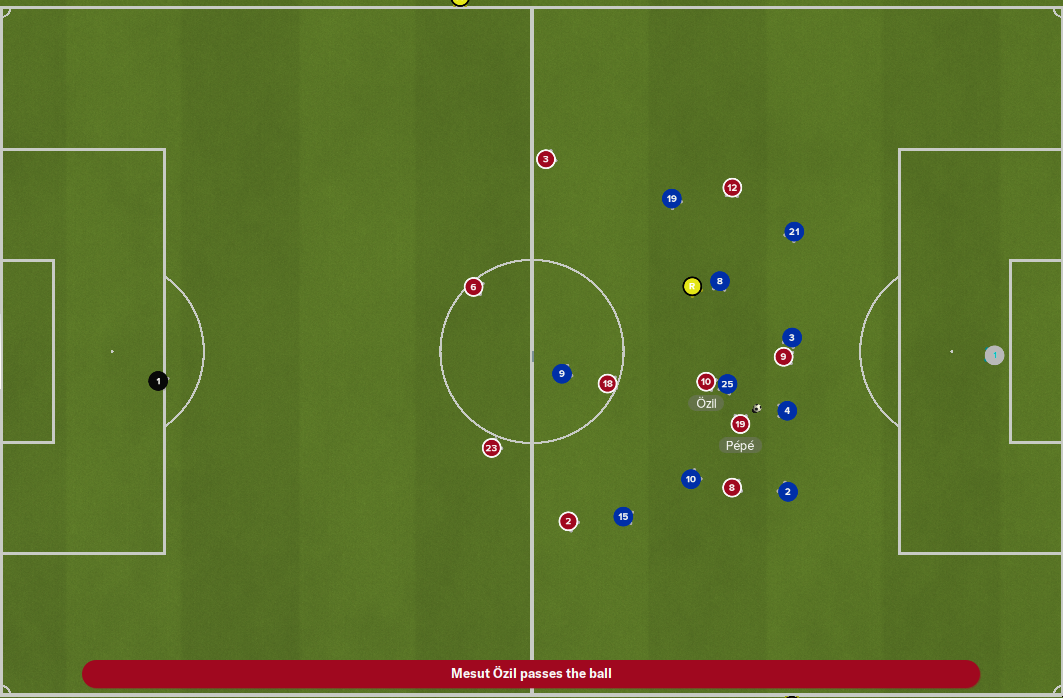 As mentioned and outlined above the shape used is a narrow 4-3-1-2 with 3 central midfielders and the Enganche operating as the pivot linking midfield to attack. In defence, the shape will morph into something more akin to a 4-4-1-1 making it difficult for teams to breakdown. 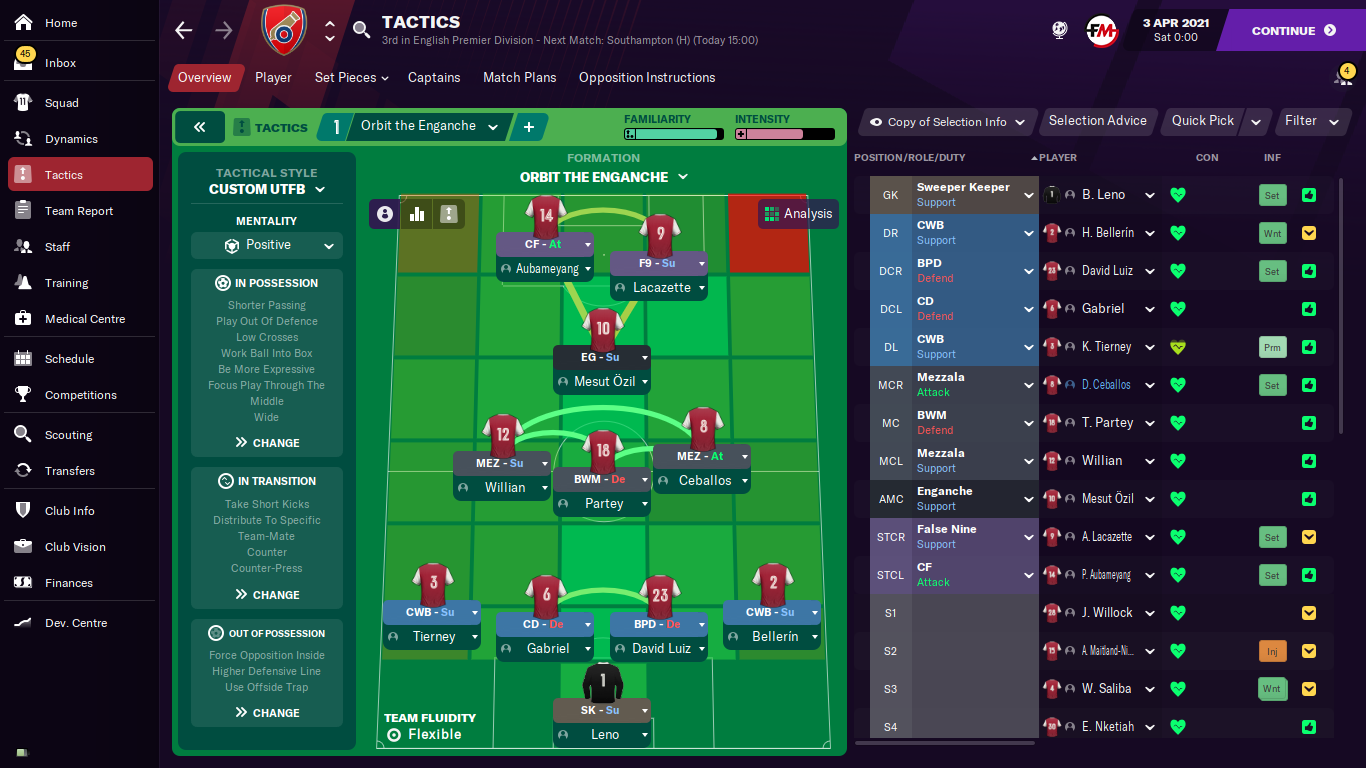 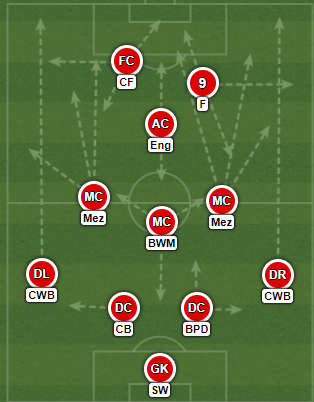 The team looks to control the central areas with the midfield advantage allowing the possession to be recycled with the aim of pulling defenders out of position through the creation of passing networks and countermovements to form space for teammates to operate in. To ensure the midfield 3 arent tripping over one another I went with a wide width giving them room to play in and to target the half-spaces. To encourage a possession style I used shorter passing but with a normal tempo ensuring the team can be more direct if required. Be more expressive allows players to move and find pockets of space and this helps get the best out of a static role like the Enganche. 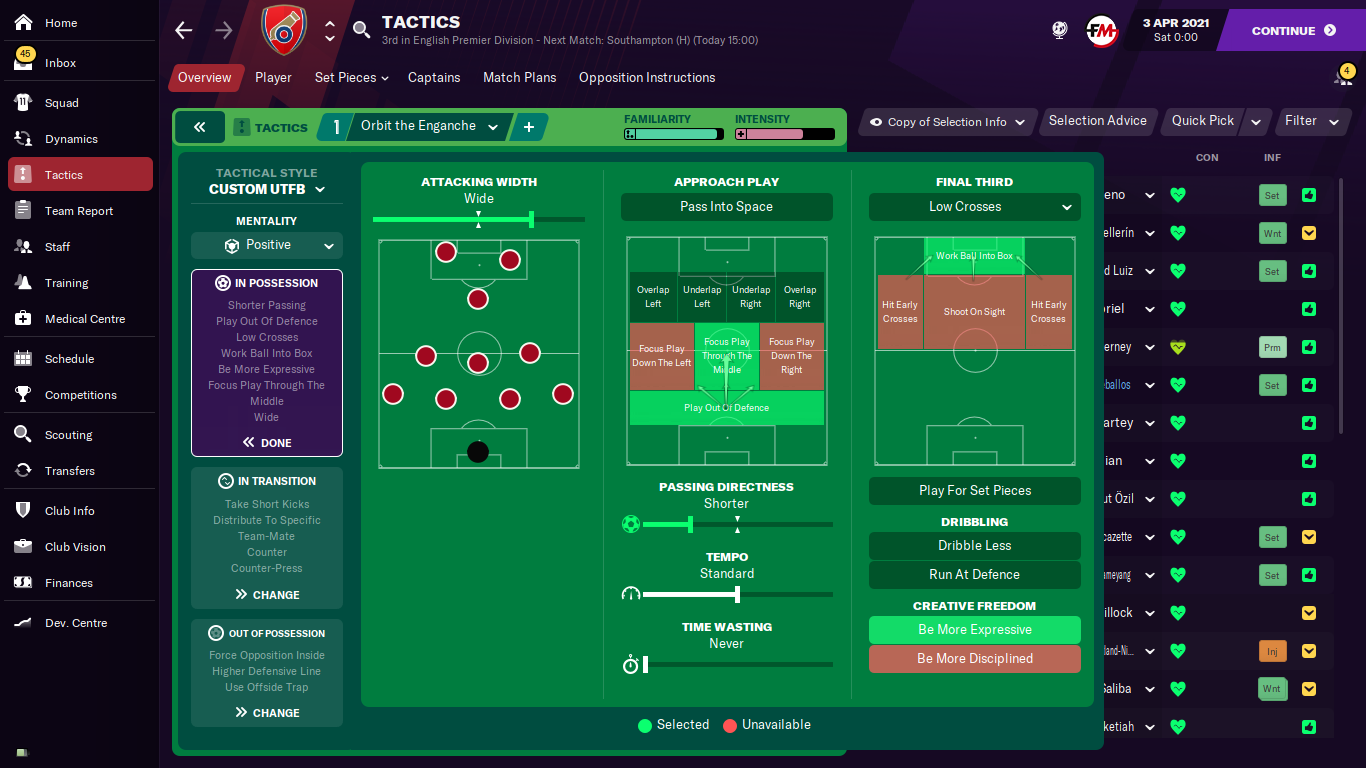 The team looks to build from the back by forming a diamond with the centrebacks going wide and the BWM dropping deeper at the point with the keeper at the base. The diamond shape allows the ball to be moved around the pressing opponents safely if the forward marks the BWM then the ball is instead passed to the centreback who can then distribute the ball to an open teammate. 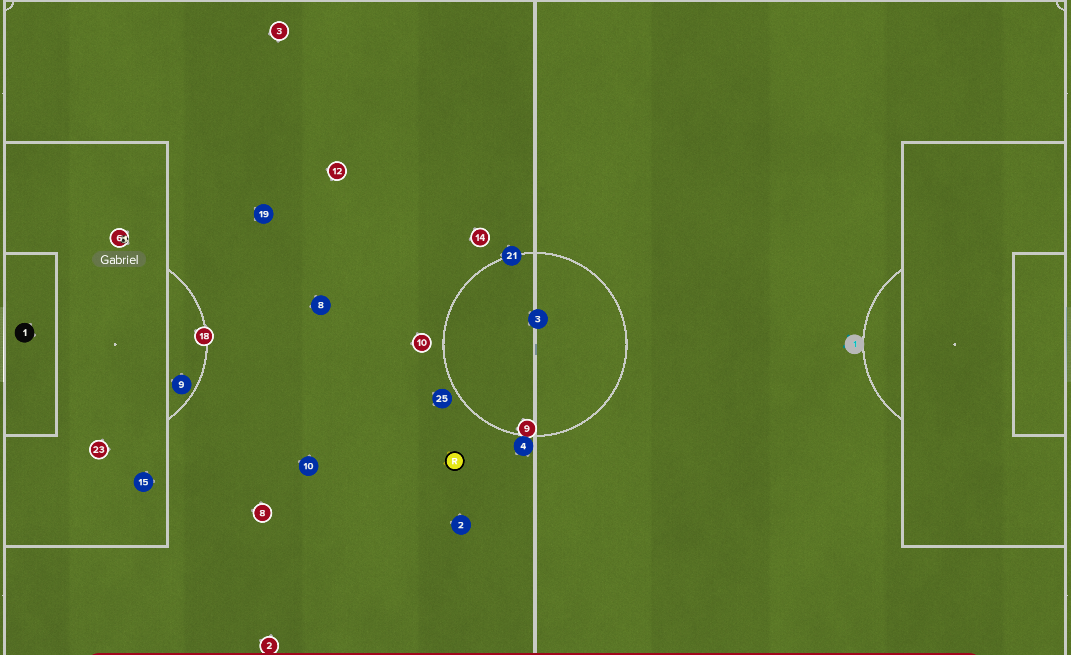 If the opposition is playing a high line and commits to stop the ball being played short the keeper can then play a long direct ball over the high line into space for a forward to run on to. 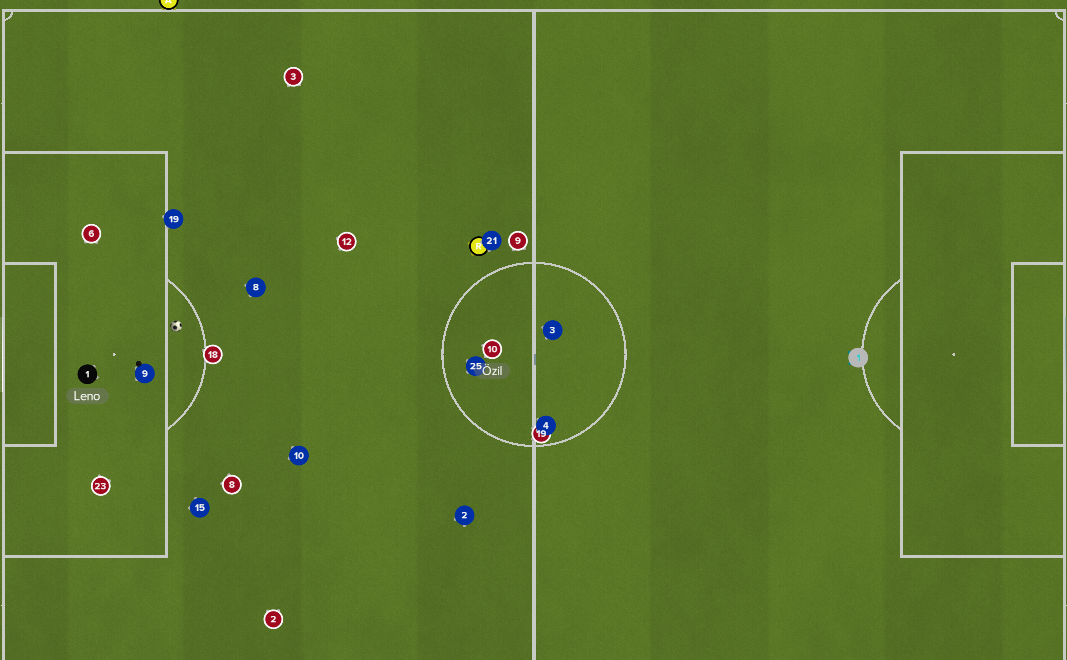 In the opponents, third of the pitch players are encouraged to roam around looking for space to pull defenders away from the Enganche who can then receive the ball and make things happen. 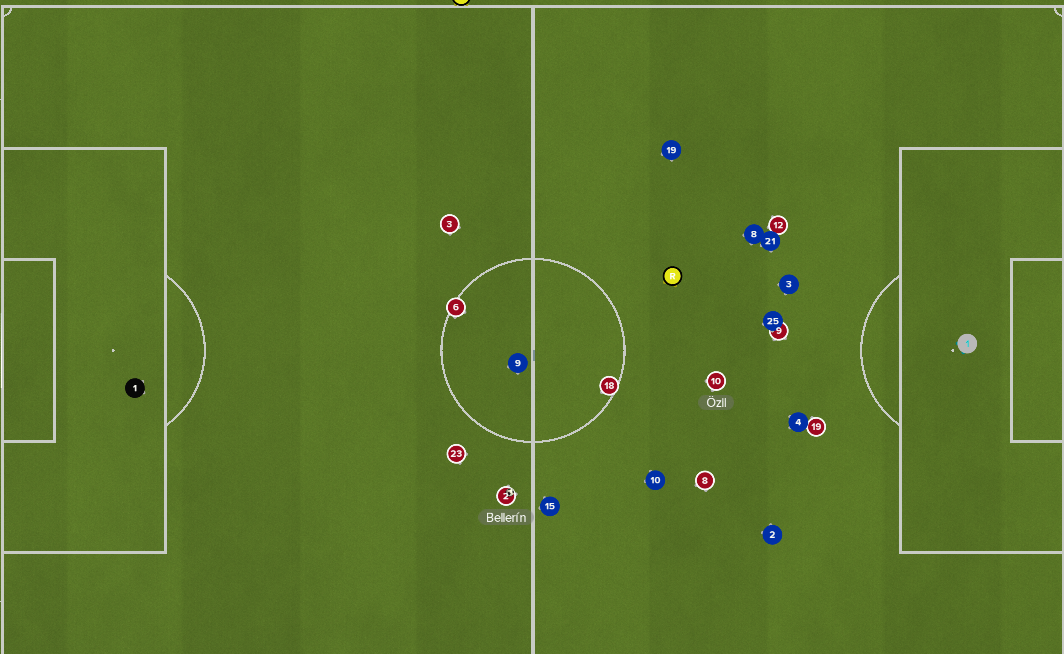 If the Enganche is covered then another option will be available, this could be a wingback, forward or in the case below the Mezzala who receives the ball before driving into the half-space committing defenders. The team looks to counter-press the advantage of the 4-3-1-2 over the narrow diamond shape is that the two wider central midfielders not only able to cover for the advanced wingbacks but also actually stay central and become the first of line of pressure on the ball to prevent a counter. Once the ball is won back then a quick counter can expose the opponent with direct balls into space or quick combination play from the cam and forwards. 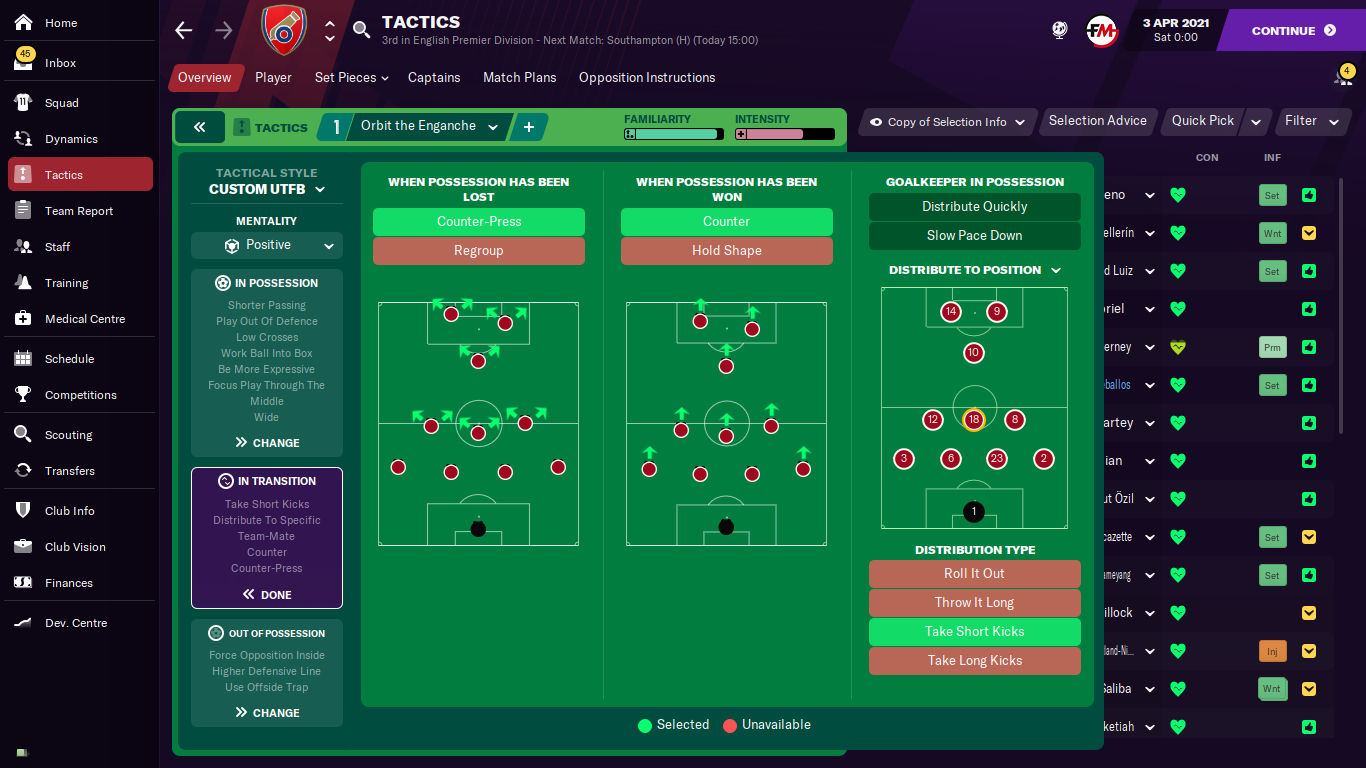 As mentioned above the team will resemble more of a 4-4-1-1 shape in defence especially when the initial press has been beaten the team will retreat into a more solid base. 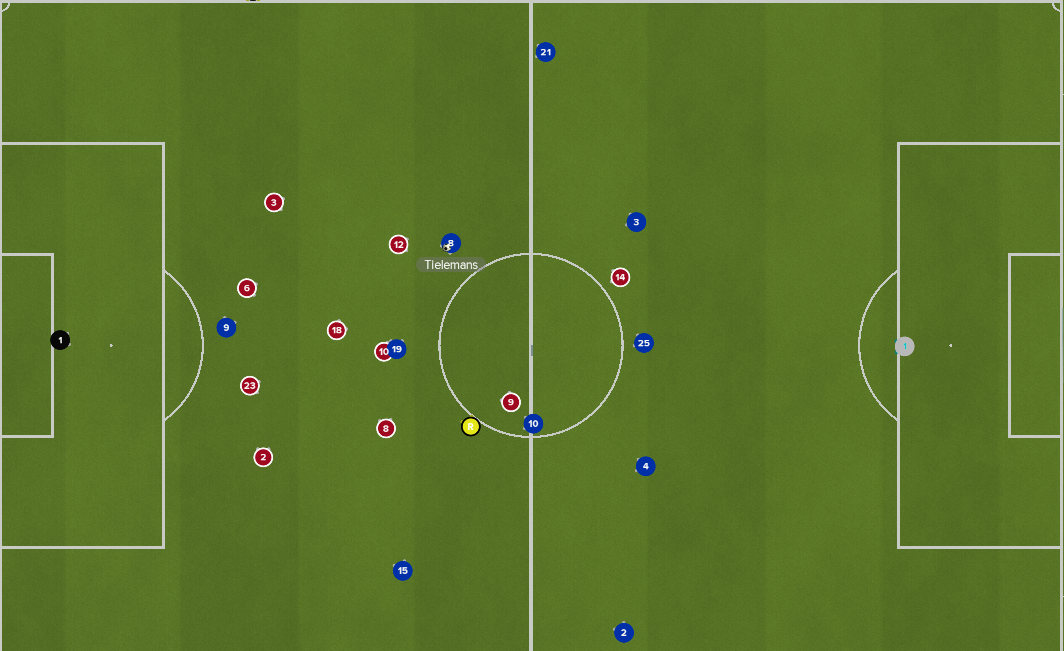 Although the team looks to counter-press the team operates with a split block, operating a higher line in defence with only a standard line of engagement drawing opponents out with the ball before trapping them in the press. limiting their options on the ball and leaving space in behind for quick counter-attacks. 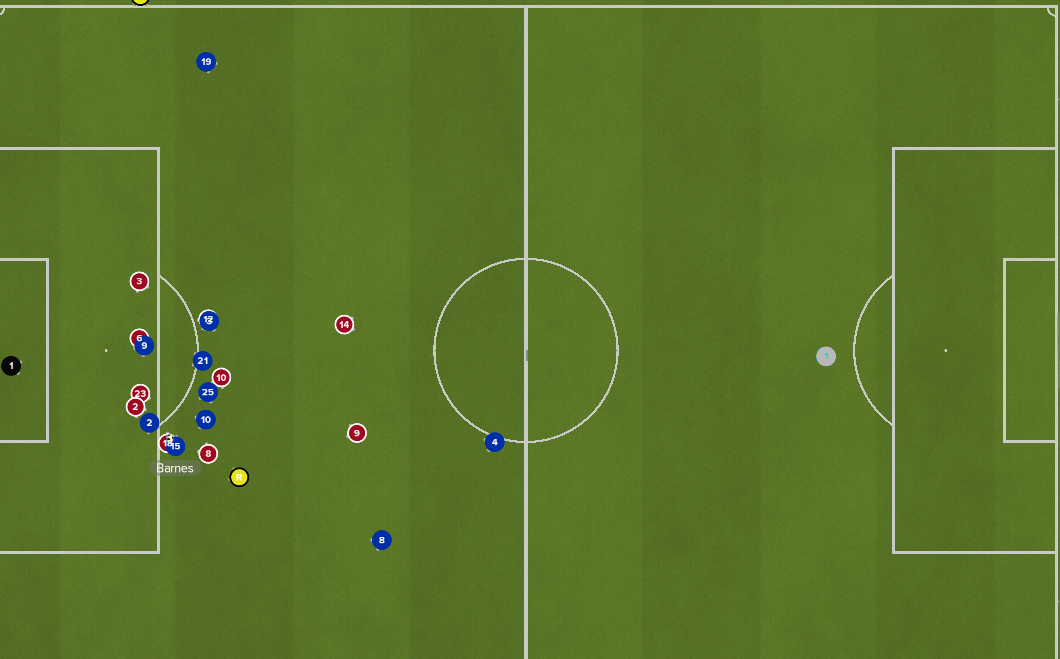 The team also looks to isolate and cut off the ball carrier by swarming whilst supporting teammates mark passing options using the touchline as an extra man aiding the press to make the pitch smaller than it actually is. This zone oriented man-marking style of pressing limits the options to the ball carrier and forces them to make risky passes which are more likely to be intercepted, allowing for a quick counter-attack. 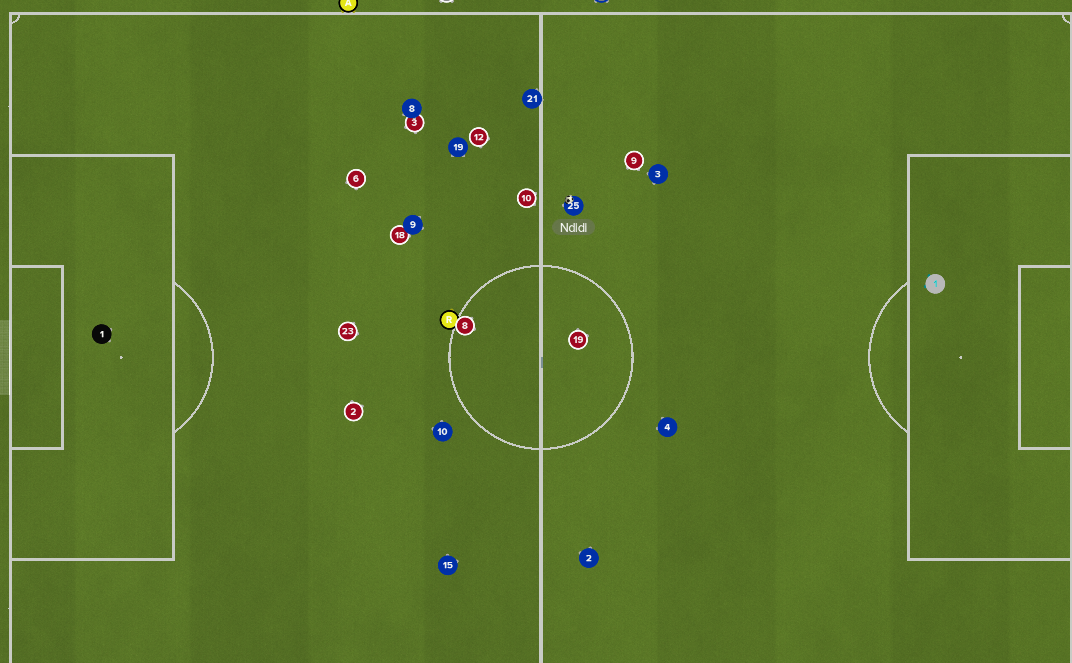 As the formation is narrow I first tried to defend narrow forcing the opponents into the channels however, this just didn't seem to suit the team at all. I found more success when defending wider funnelling the opponents inside which allowed my team to win the ball back and counter. 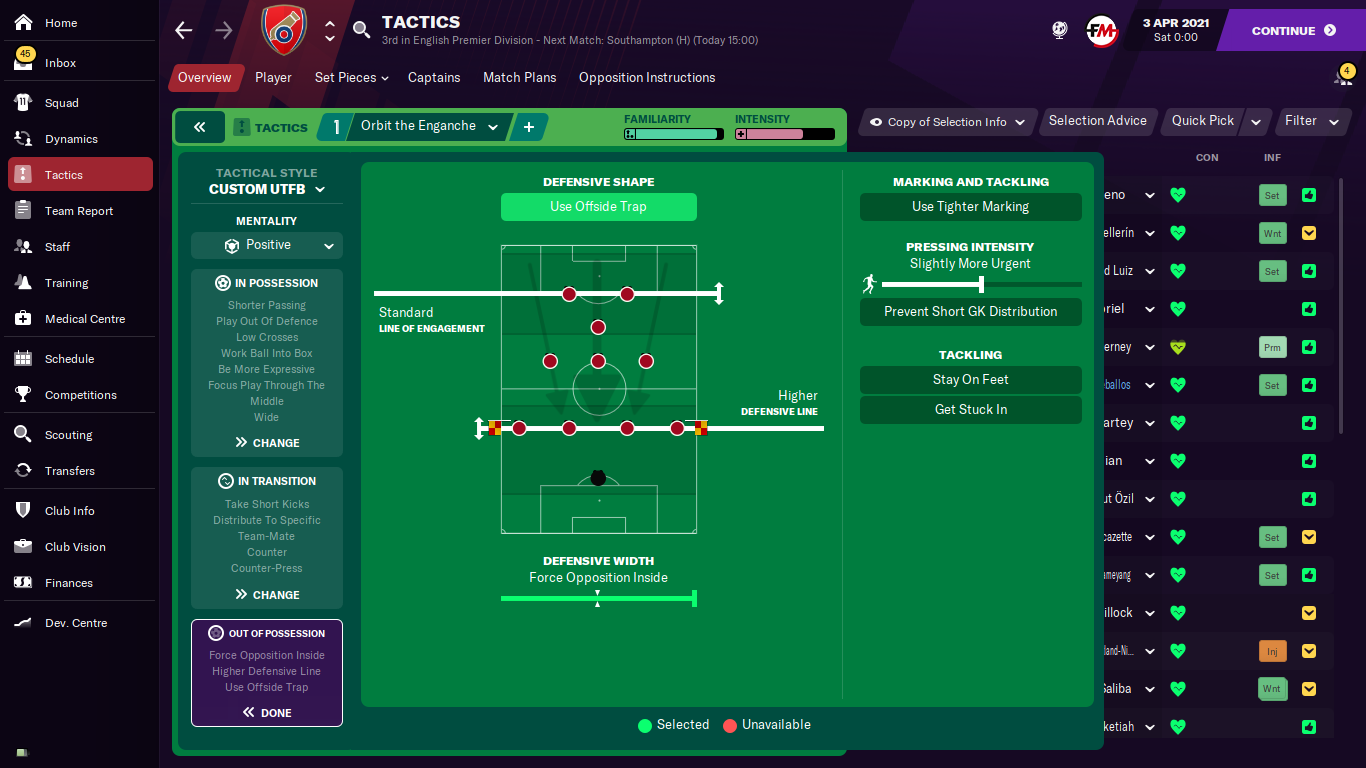 I was pleased with the results winning the league cup with Arsenal and I can't help feeling with a better defence I would have won the league. I also simulated a season with Valencia who also finished 2nd but the big surprise was WBA finishing 7th. 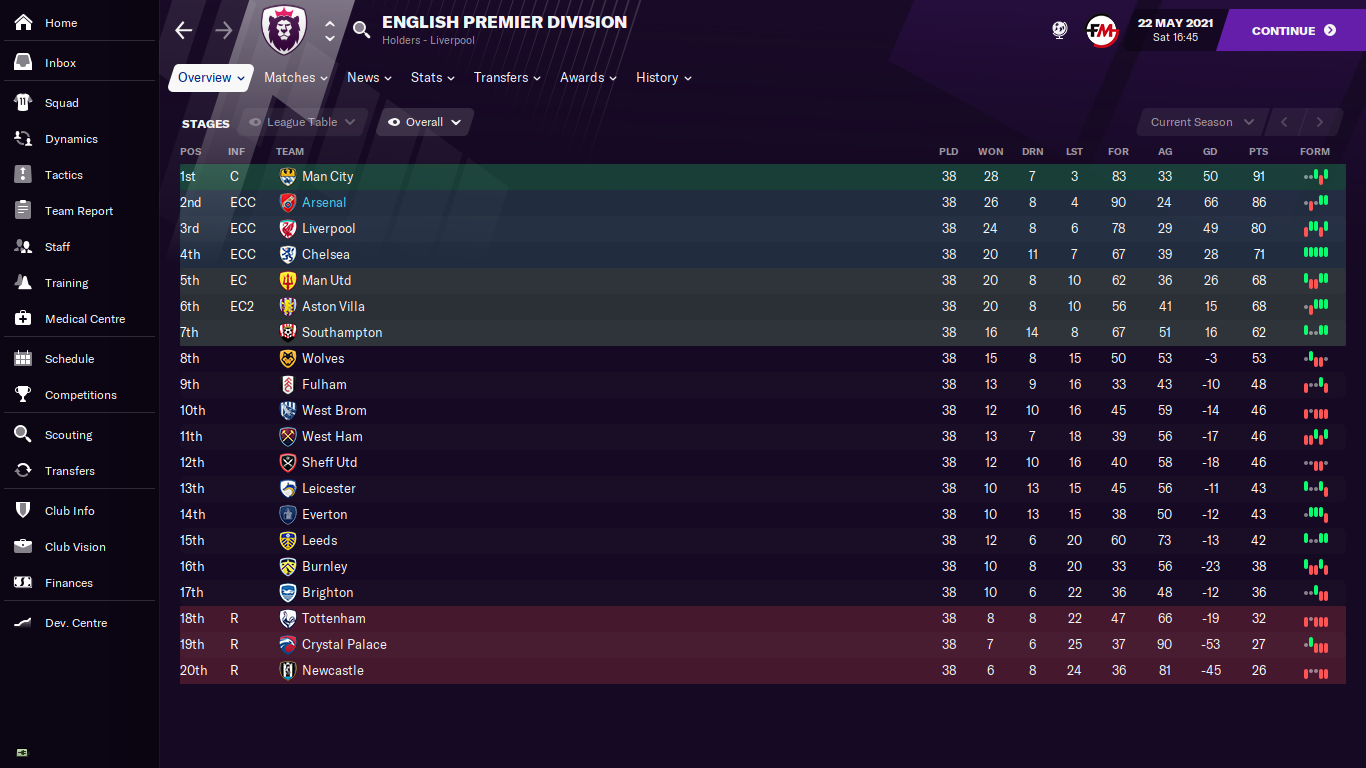 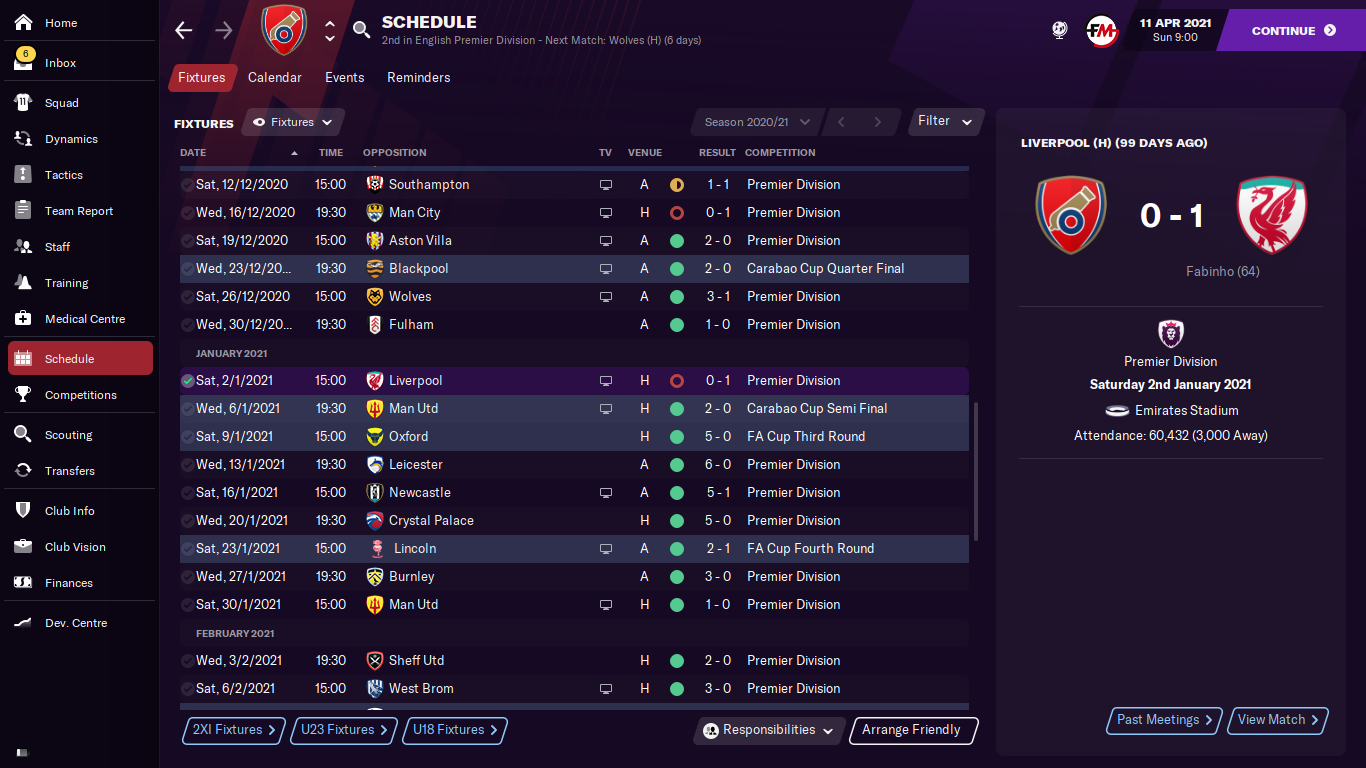 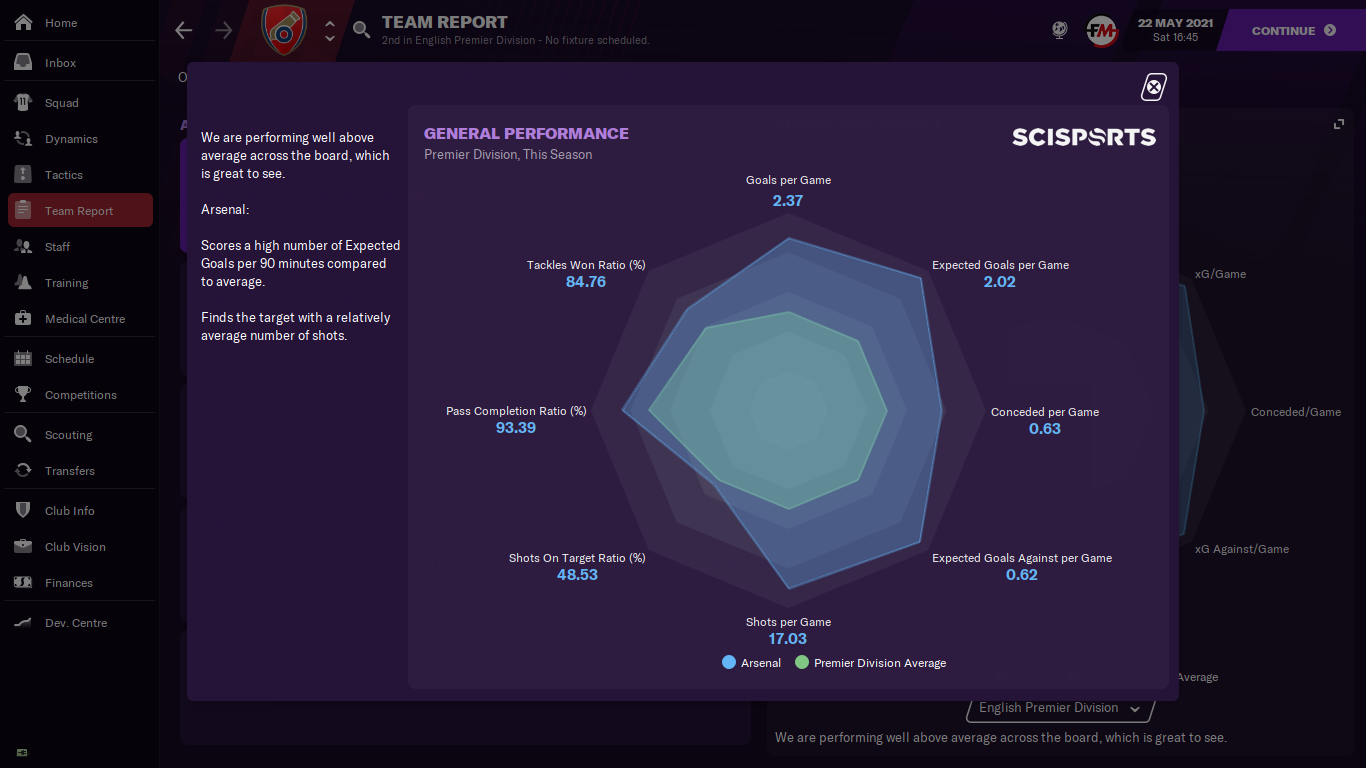 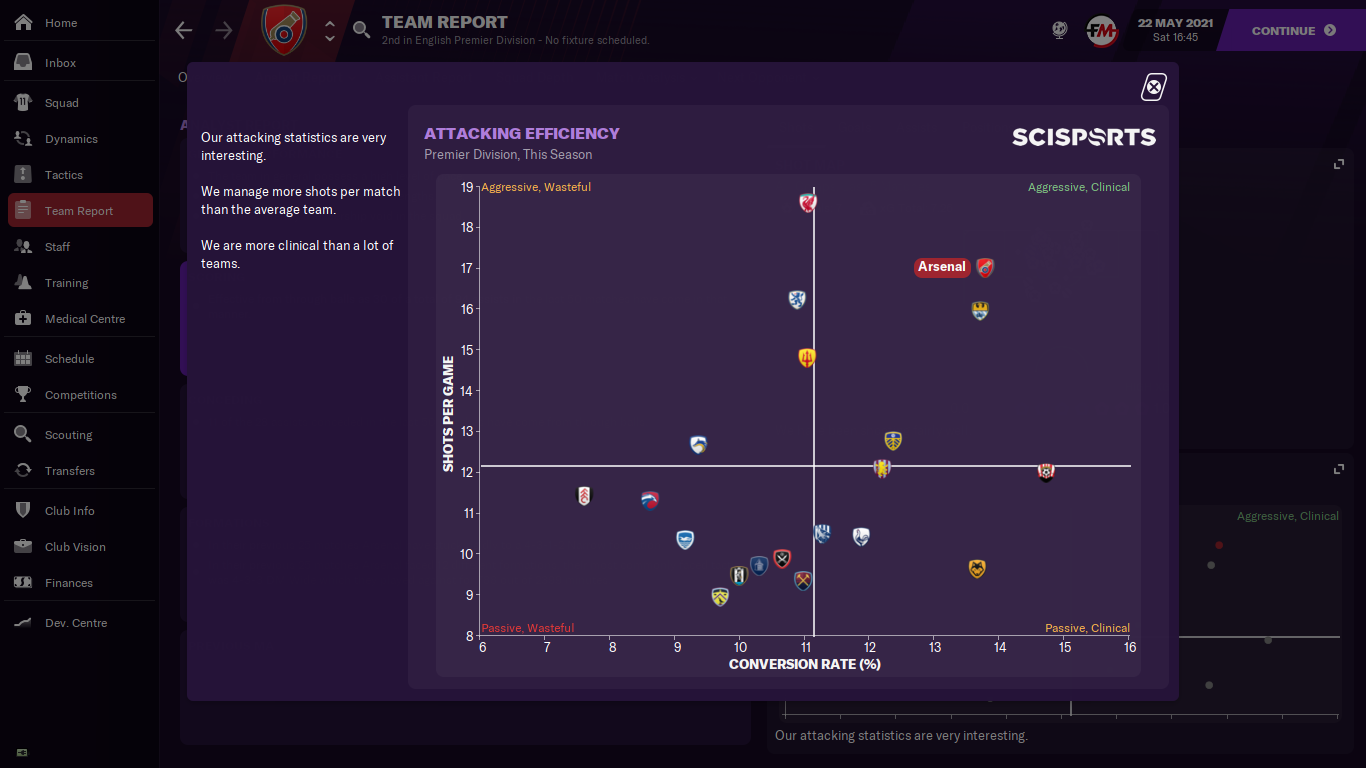 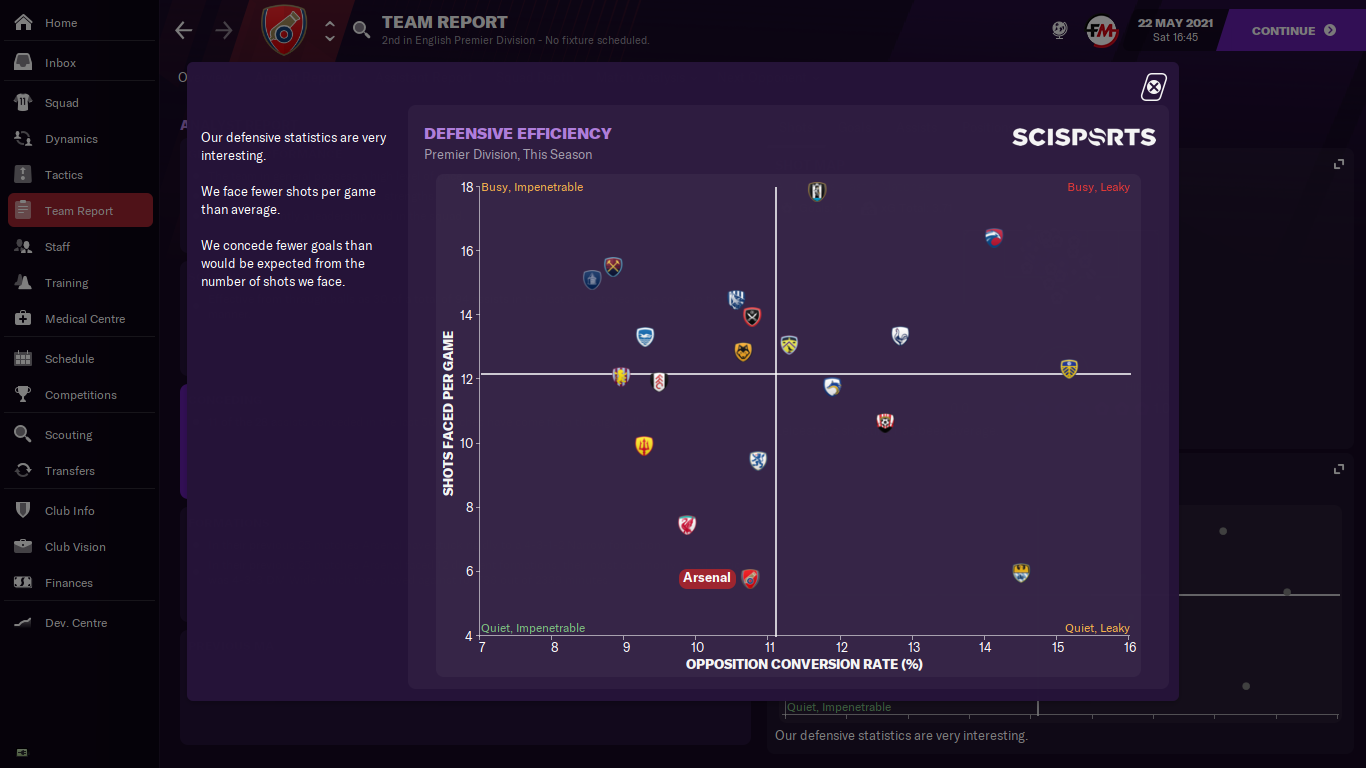 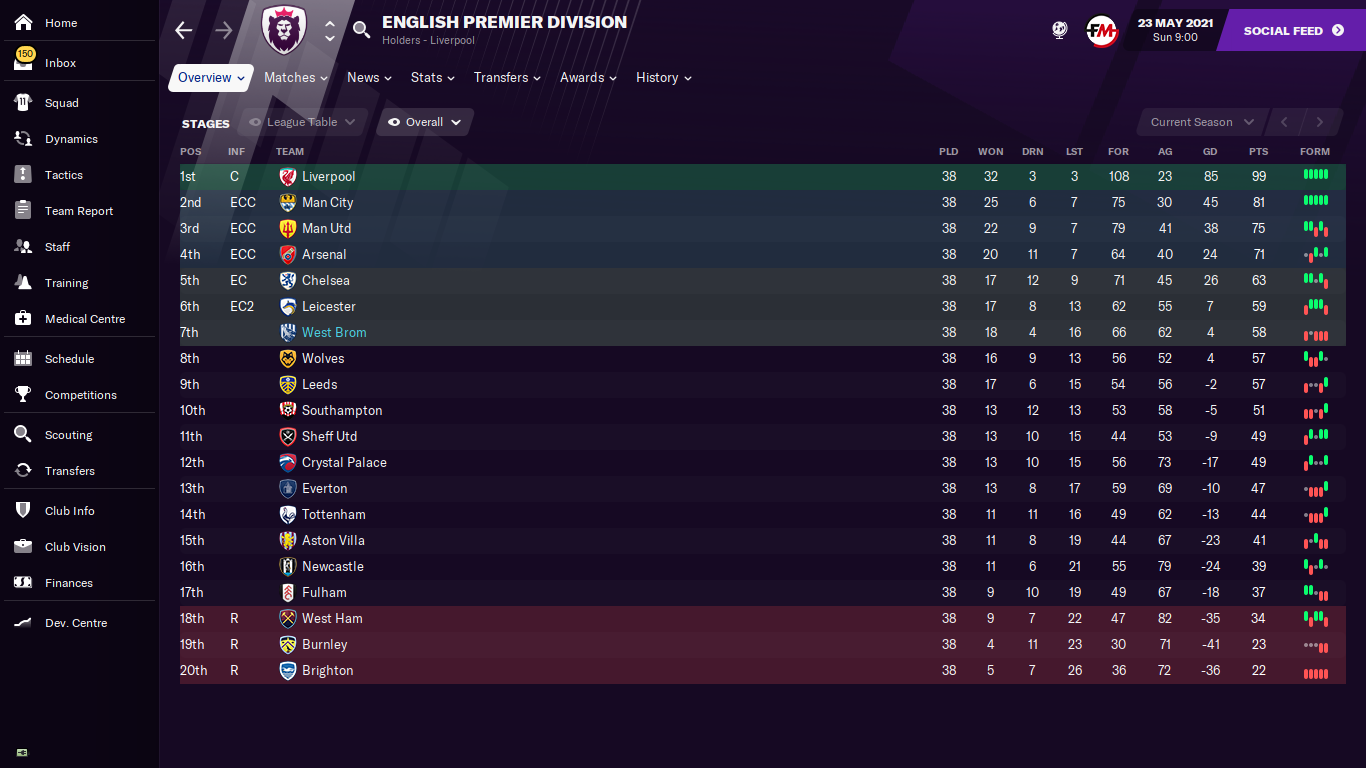 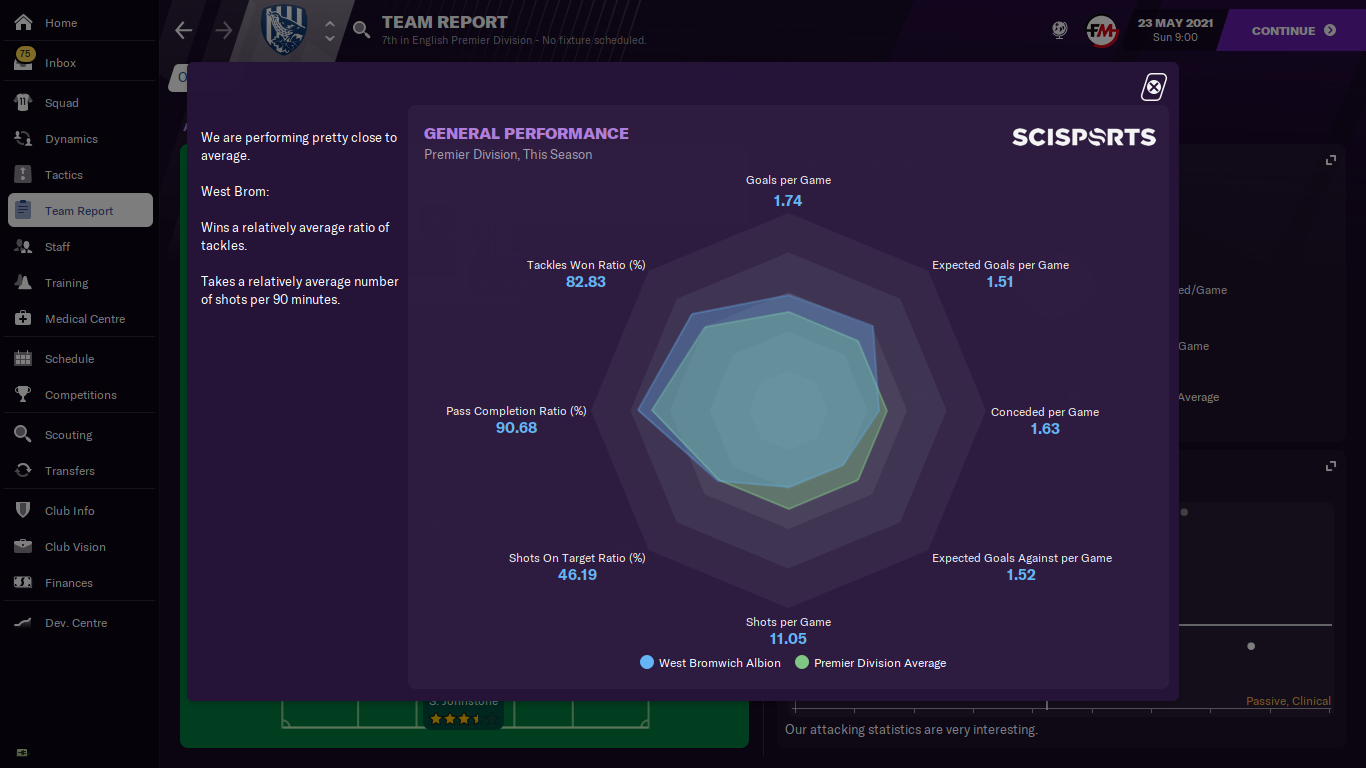 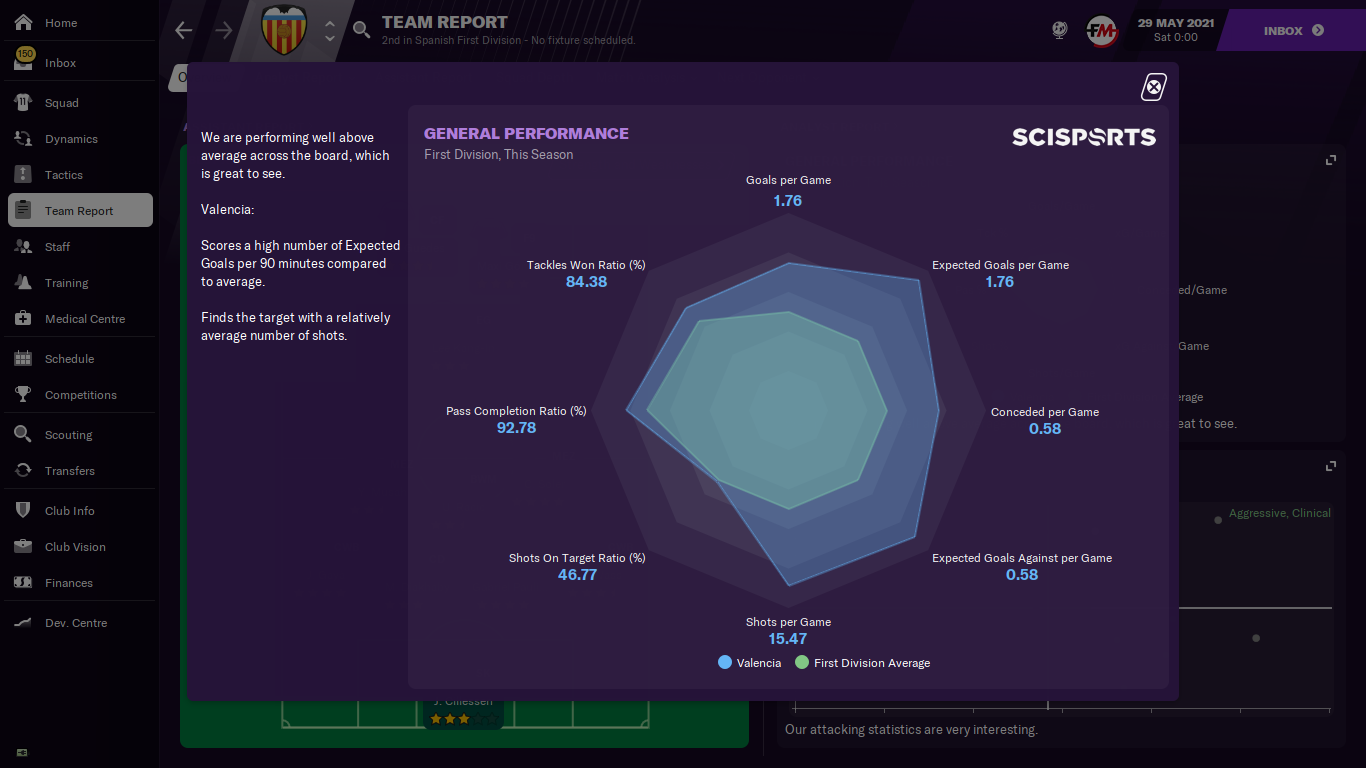 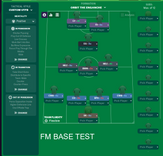