Omega on paper appears to be light in the midfield with the 32230 no DM no CM.

But... On attack: The CD libero pushes forward to become like a DM - the inverse of a halfback. The IWBs push forward to become Centre Midfielders. Effectively becoming like diagonal box-to-box midfielders. The Engache (previously i used an AP) is the lynchpin/pivot for this system & the Shadow strikers push on into the box.

And... in Defence: The IWBs (diagonal B2B midfielders) are covered both by the ML/MR who are on support duty as well as the RCD & LCD who are instructed to be wider. The Shadow strikers lead the press from the front & provide more defensive coverage vs using strikers.

I use this formation when i'm up against a team of equal or lesser ability. 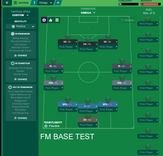