I usually conced about 15-20 goals per season and score about 85-110 goals. It gets me around 64 % possesion under the season. So 70 % possession or more in most games isn't uncommon at all. But maybe the biggest achivment i've done with this tactic is that it won me the league and champions league with bologna in the SECOND season.

U have to play one line deeper with both lines if your'e faceing a counter attacking team. But if they have any inclination of playing from the back or with a high line maybe an offside trap. Then go very high. So Klopp and also i think Solkjaer is still a very high line but maybe a Simeone is just a high line even if they play a direct tiki taka. All of the front 3 usually gets me 20 or more goals per season each. with very good contribution from the rest of the midfield as well.

I just uppload this to see how it stands against other tactics here. So feel free to make it better if u can or if u have any remarks about the tactic, let me know. 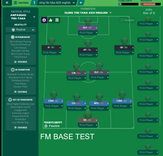