The idea is to have a lot of players filling the middle of the park while using the wingbacks as tools to move the defense from side to side. That's why the play is focused down the flanks to keep the ball moving from side to side. I tend to teach most middle players to "switch ball to flanks" as well to enforce this even more. This is also why the tactic plays wide - to create more space for all the players in the middle

The shadow striker moves up to support the AF with the B2B moving up in that open AM slot left behind. The mezzala moves around the outside of the AM and cuts inside. Half pack functions as a very deep early playmaker.

Ideally I like the wingbacks to be the corner takers and indirect freekick takers if they have the attributes for it.

Middle of the park 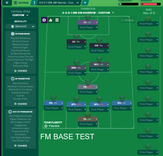