This tactic was made and played with Juve so I highly reccomend to try it with top teams.

It's since 3 years I'm trying to replicate successfully the teamplay of Juve during the middle '90s. My intention was, and still is, to be as faithful as possible to that tactic rather than win everything. Luckily the recipe was good enough to allow my team to lift some trophies! An high intensity, straight forward and aggressive football trademark of the legendary coach Marcello Lippi, a 4-3-3 where the strongest point was given by the cohesion of the team and by the dedication of the 3 strikers helping the midfield with high pressing and aggression.

My goal is to reach the offensive third as quickly as possible, so once recovered the ball must be delivered immediatly to the forwards, in a beautiful direct-pacey anti tiki-taka style.

HOW IT WORKS: TEAM INSTRUCTIONS

An offensive mentality is what I need for a team expected and built to win. It provids the quickness and the aggressivity I need to recover the ball and start immediatly the counter. I want my team to play as direct as possible but a shorter passing is set to refine the PIs. In an attempt to be as faithful as possible to that style of play, I'm asking for a counter-press once the possession is lost and a counter when the possession is got back. Tight marking, offside trap and an high intense pressing are required as well. It's also very important to set the DL and LOE properly: the shorter the strata the best to get the max from pressing, and also allows me to involve strikers in getting the possession the ball back not being them too isolated from the rest of the team. Also, no OIs are set, from me or my assistant, at least initially on this tactic. I find OIs a bit risky to be used as default and they might "mess" the tactic settings somehow. But don't misunderstand me, I suggest you to use OIs as much as you need it, because they're useful and they work! I occasionally issue some OIs but I like to do that in-game, reacting on what is happening on the pitch.

You won't win the medal for the "team that conceded the least in the season". This is an offensive tactic so you have to accept you're gonna be vulnerable somehow. But the payback is worth playing like this. 2 strong CBs will provide the proper solidity, 2 fullbacks on attacking duty will provide a good cover and attacking help on the wings just like the fantastic duo Torricelli - Pessotto.

The 1996 midfield from the Champions League Final was: Antonio Conte, Paulo Sousa and Didier Deschamps. So we need a deep lying playmaker with defensive duties, 1 midfielder with great tackling skills but also able to move forward from the deep and score some goal (Mezzala on Support duty), the other one just as a breaker and box-to-box. A good balance to provide good cover and fast counter supporting the transitions.

Playing as Juve I have no problem on setting a proper front-line. Of course replacing the legendary trio Ravanelli-Vialli-Del Piero is not possible but I tried to do my best with Ronaldo, Dybala and Morata :) The key is Dybala, placed in the center of the trio as Deep Lying Forward on support duties. This gives the proper liason between the midfield and the offensive third at the cost of few goals scored - but many assists delivered (15 during the first season, 10 goals scored. Not bad anyway!). To be perfectly faithful I had to set 3 Pressing forwards, but let's see this as a compromise between real world and FM.

As said above I personally find it quite faithful and funny to play. Once the ball is delivered to the strikers, if you have high quality and creative ones, you'll see beautiful moves and finishing. The high D-Line grants a good domination of the game and fullbacks provide some wing-play needed to unlock close games. You'll rarely win (or lose) games by a 1 single goal difference.

This tactic seems to suffer particulary against team playing formations like 4-2-3-1 wide, being outnumbered in the midfield and leaky on the wings due to the narrow width shape and due to the nature of the tactic. I sometimes react to games going badly moving to a 4-4-2 or widening the defensive width. Be ready to sacrifice some games for the sake of fun. It's also very demanding physically and your players will get tired more often than normal, so I'd strongly suggest to have a good squad with proper backups so to plan a weekly rotation.

Another thing that pushed me strongly to create a tactic like this is... I have enough of tiki-taka! Personally I find it boring to watch so my attempt was and still is aimed to get from my football team what is diametrically opposite to that culture. And yeah I like to win and the greatest satisfaction for me was to apply football principles to FM and not creating an exploitative tactic, and see those principles working as intended, or very close to. 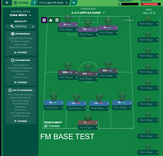