I wanted to create a tactic that would have solid defense and would be good for underdogs and I think it turned out very well. For example 90 points with RC Lens predicted to finish 19th and Ganago with 42 goals in 38 apps: Attachment 553368 Attachment 553369Attachment 553370

also thx to Kippa9 for testing my tactic with following teams: 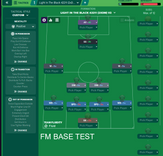