The idea is to get as many people into the box as possible since in term of quality we cannot complete with the big team we make up for it with number I tried to make it 4 striker but FM2021 does not allow that so it 2 Top and 2 Wide which Operate as Striker anyway With that in mind, i am not really that happy with this tactic yet. I have been trying to find game breaking tactic for FM2021 but so far no luck. I got some big result against some big club but i also struggle against some smaller team. Element of luck is also an issue, I got lot of last minute corner goal and some red card in my favor. I play every match myself, i did not "sim" it hence don't get fool by the all win result, alot of those are lucky and lot of those i had to make minor adjustment in between game to win it. Also expected to get book alot for this tactic too

Thing to look out for, Work Rate, Passing , Pace, Stamina

Since this is almost similar to all out attack tactic and all out defense tactic too, your player will move around alot. Goal will be score between the Front 4 with not one position being the stand out goal scorer. 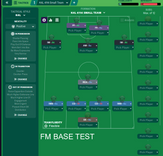