I played a different tactic when I was going up against a side with three strikers and moved my wingers inside and moved a midfielder back into a defensive winger. I had a Ball-Winning Midfielder next to the Mezzala originally, but he got sent off after two yellow cards, so I tweaked the tactic to make him a second Mezzala on Support.

The Shadow Striker was originally behind two Advanced Forward but decided to make the one on the left a Deep Lying Forward on Support, with the idea that they could cause chaos upfront while allowing the Advanced Forward on the right to use his pace to pierce the defence when a killer ball comes in.

The wing-backs on support cover the lack of width, but with the Mezzalas roaming out wide as well, they will hopefully provide support if needed for the wing-backs.

This is being played with a side expecting to be in a relegation fight, and we created a lot of chances, so I like to think that this formation can create chances. 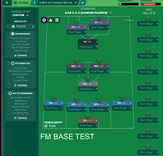