This is a tactic that took a while to come together but it finally happened.

Its a simple 442 that incorporates a target man, he's there flicking it on and he's there in the box as well for set pieces but the link up play is fantastic.

I play this tactic in my current stream on twitch and it is going fantastic.

When going against super good teams I drop mentality and when I need a goal I up the mentality. I am in league one and beat a prem team by doing this.

When it comes to seeing the game out at the end if you are winning then change a few instruction like play for set pieces and run at defence, anything that could lose you the ball and start wasting time, make sure you change your goalkeepers distribution to the back line and to slow pace down as well because its set to aim for the target man.

I did a tactic test video on it and it was impressive but not as good as actually playing it.

FRANK THE TANK 4-4-2 CHANGED EVERYTHING 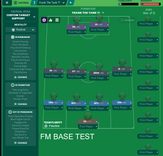