It is a tactic based on build-up from the defence, where the centre and full-backs have good technical and passing skills and where there is a 3 mc line supporting both defence and attack. I used a different kind of strikers depending on what I need for specific games. It was surprisingly good, I was promoted on the first year and now on 2nd division, we are going first! And actually did not use any more defensive mindset at the start, changing slightly during the game. Otherwise, I use Equilibrated and Positive to start the games.

PS: Just eliminated Sporting on Taça de Portugal. I lowered the wings to the midline mc's position, making a 4-5-1 to clog the wing force predominated in Sporting. 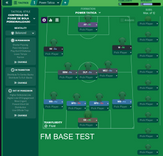