Tactics used throughout my 2020/2021 season with Paris SG; previously I perfected it on other parts before arriving at the latter. I set it up to use the players present within the Paris SG.

The defensive base is based on 2 ball playing defenders and 2 wing-back.

The 2 wing-back often go up to center.

The central midfielder has the role of deep laying playmaker.

As for the attacking midfielders, they have the role of inside forward, the latter do not centre but focus more on the dribble by refocusing themselves in the axis, giving short passes to the strikers, they are there to make decisive passes.

I don’t put any individual instructions before the game, I usually refer to the advice of my assistant.

Tactics take a long time to be mastered by the players. 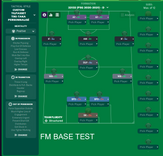