Without any transfers, this tactic enabled Leeds to finish in the top 4, while Fulham and Sheffield finished in the top 6.

Results in all competitions:

The foundation of the tactic is to play out from the back, with a high tempo. Make 3v2’s and 4v3s all around the pitch. Wide players run into spaces behind when off the ball. Short passes aim to create as many options around the ball carrier as possible.

To make the most use of this Gegenpressing tactic, the team must attack and defend as a unit. We require extremely hard-working players as the system relies on every player’s determination, bravery, work-rate and stamina. With Leeds, 50% of the players have a work rate attribute above 15.

Pablo Hernandez (RW) is the main playmaker who drifts to AMC(R) during the attacking phase. The Segundo Volante - Attack (Kalvin Phillips) is a type of B2B+BWM who runs with the ball on the Attack duty. Meanwhile, the Anchor-Man (Robin Koch) falls back into a third centre-back role during the attacking phase. If the opponent plays with typical DM(C)s in a 4-2-3-1 or 4-3-3, there is no traditional AM(C) on our team to mark.

The squad is generally not gifted with exquisite passers of the ball, so we give the ball away in advanced areas, to create distance between the opponent's counter-attacking chances and our goal (Leeds is 18th out of 20 for pass-completion ratio).

We apply intense pressure in the final third to win the ball back again in a favorable counter-attacking position. The advanced positioning of the RW and RWB prevents the opponent’s LWB from pushing up too often. This allows other attackers to move into channels taking defenders with them. A higher Line of Engagement compresses the size of the play.

The asymmetrical nature of the tactic is used to emphasize a team's own strengths, and hide their weaker side from being attacked. The objective is to create a tactical overload on one side of the pitch, typically on the weaker side of the opponent’s defence. We also only overload the opponent in advanced areas, increasing the number of players available when we have possession.

The AM(L) is covered by a narrower player on the other flank. Due to his lack of pace, Pablo Hernandez is asked to stay behind, which mitigates Raphinha’s lack of defensive coverage as Winger-Support in the AM(L) position, while Ayling provides attacking width down the right.

Bamford with the Comes Deep To Get Ball trait will cover the gap in front of the Segundo Volante. The strikers try to stretch the defense apart. One player will go towards a fullback, and the other will stay in the middle. Attacking the half-spaces usually results in defenders being drawn out of position and our playmaker Pablo Hernandez will be free to manipulate the space.

Asymmetrical tactics are weak against teams with stronger players on the wrong side of the asymmetry.

There are still gaps for which the opponent can exploit behind the AML, and in front of the Anchor Man.

The tempo of this tactic is extremely intense. Players need to cover much more ground than with a symmetrical formation. Minutes have to be managed to mitigate the higher risk of injuries. A competent bench is required to sustain an entire season.

Competitions: 4th in the Premier League. 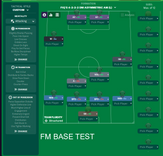