Foxy showed in the streamer showdown it is possible to go strikerless, so I tried to make a defenderless to counter it. So far it seems to be terrible but I want to see just how bad. This version is the one I believe to have the highest chance of success, due to involving a line of defensive midfielders. But I feel like this one slightly runs up against the spirit of the defenderless idea.

This tactic comprises a 4 man back line in the defensive midfield, 2 CDMs set to be ball winning midfielders and 2 wing backs. Then sitting in front of them are a 2 man central midfield supporting a 3 man attacking midfield (comprised of a shadow striker and 2 wingers). Then up front we have a sole striker.

This tactic feels the most likely to be successful due to the areas of the pitch it covers being greater. However I have noticed it is still relatively easy to get in behind. 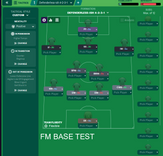