Played with Leeds, finished 7th first season and won the league Cup whilst working on the tactic. Tried to match the shape to Leeds IRL heat maps - but due to the game engine I've had to change the shape to get results rather than overloading the centre with 2/3 players as the heatmaps are IRL.

Second season with a couple of additions we finished third, winning the FA Cup and Euro Cup 2. Averaged 53% possession over the season which was third highest in the league with a fairly average squad.

In terms of OIs I let the assistant pick them. In terms of players I sign players to play the roles but have a left footer on the right wing. I also have used a right footer on the left to good success but as I'm playing as Leeds I'm overloaded with talented left footers!

I leave it on attacking most the time but against the top top teams I'll switch to cautious or balanced. Also if you're against a front two and getting overwhelmed, switch the DM to HB and the B2B to DLP(S) 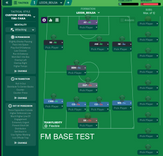