Currently managing National in the Uruguayan first division. I like playing with 3 defenders but was concerned about being over-run in midfield so thought I'd try using IWB and they've performed well with my RWB having currently created the most clear cut chances in the league.

The IWB is a pretty specialized role. They need to be able to defend, have high stamina and also be able to pass. They also often find themselves on the edge of the box so if they're able to shoot from distance it is an added bonus.

I've found that my AM's have thrived in this role, having a striker ahead, 2 wingers out wide and the IWB's centrally they have a number of passing options around them

Weaknesses I have noticed are being caught on the counter (Mostly from corners so might be an issue with my corner tactics) and my strikers not scoring enough goals.

Sometimes like to change keeper distribution to just full backs if opposition is using more than 1 striker. Also sometimes move DLP into a deeper position and distribute to him if I'm concerned about being caught by opposition high press. (Tactic was developed from generic Vertical Tiki-Taka) 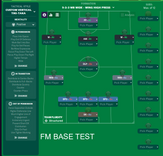