The tactic is based on a counterattack using speed of the advanced forward and wide defenders, after reclaim the ball it is quickly forwarded with a long pass, most often to the striker if he is in a good position to overtake the defender, then using his speed he creates 1v1 situations, an alternative option is to play to side defenders who will cross low so that the main striker can overtake the opponent or play a high ball on the second supporting striker. 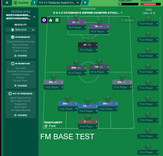