The tactic was developed on a save with Colchester United. I found I had quality attacking wide players for the division, but not enough in the attacking midfield, defensive midfield or striking departments; this ruled out 4-2-4, 4-2-3-1 and 4-3-3 DM Wide. I decided to go with a flat midfield 3 as a result.

Opposition instructions are a mildly modified gegenpress, bringing the tempo down a little to account for playing in League Two, where my players are not as fit.

For the DL and DR, pace is huge. I've had Cohen Bramall demolishing the league with loads of assists and the highest average rating in the league, because of his 18 acceleration and pace.

The goals in the tactic are mainly distributed across 5 players, with the ST scoring the most, the AMR and AML about equal second, and the Mez and BBM chipping in with a few. Assists are heavily concentrated in the AML and the DL and DR. 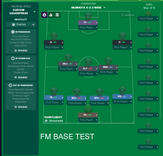