Using on a create-a-team, completely turned around the form of my team which is likely the lowest in League Two in skill, as we have achieved promotion two years straight. After previously changing my tactics multiple times, I finally decided to do a lot more research into a formation I was extremely used to, the 433 with a defensive midfielder. This tactic I came up with immediately saw major success, seeing my (at-best) VNL skill level team upset a Bournemouth team, that easily won the Sky Bet Championship, in the FA Cup third round. We even held Premier side Tottenham to a 0-1 game until 70 minutes in. I proceeded to win a large majority of the rest of my games, and after only having this tactic for 20 of the 46 games played, my team that was given the objective of "Fight Bravely against relegation"(For the second year in a row, after a promotion) finished 9th. There are some strange weak points to this tactic I've noticed, principally, a strange inability to do anything offensively in the second half. Of course, this also goes for my opponent, leading to at least 4 of my games played having literally zero 2nd half highlights. So while it thrives in shutting down even exceptional opponents, it sometimes doesn't have quite the offensive punch as some of my other formations, though it did average around 2 goals a game for me. The league game stats for this tactic for me was: Record(14W-2D-4L) GoalsFor(Total: 38 Avg: 1.9) GoalsAgainst(Total: 21 Avg: 1.05) 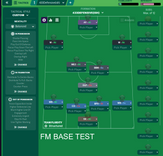