I Made this tactic for my team, no Idea if it's good or not. I have the standard 4-2-3-1 DM as a base, and added a more advanced central midfielder. Then I added wingbacks, and changed roles to more suit my players. It's April of the first season, and I've been using this tactic since about November, after some experimentation. I'm first in the league, and scoring loads of goals, but that is with haaland up top. I have the corner strategy from Zealand's Set Piece God video, and a standard throw in and free kick set up with no changes (that's probably something I should do) I honestly don't know how good this would be for any team but mine, since a lot of the roles are specific. You probably need a striker that can score almost everything in his way, and some gifted long shooters, so if you're in a low division, I don't think this would work. 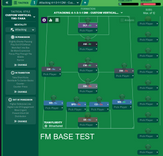