It's an asymmetrical 4-2-3-1 that I invented to overcome the problems often encountered in the classic 4-2-3-1, especially the space between the defenders and midfielders. I used it with Feyenoord, Leicester and Betis Sevilla with success.You have to be very careful with the opposing striker(s), as their calls often hurt a lot, so it's important to put your central defenders in cover and mark the striker(s).

The tactics is in French. 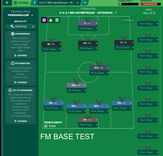