My first attempt at uploading anything to this site.

After taking Dresden to the Bundesliga with a 4-2-3-1 tiki taka style tactic, I was strugling to dethrone Bayern, finishing 5th in my first Bundesliga season and 2nd in my second season. For the third season I tried to rework it to a more counter attacking style, moving my right winger up as a second striker and my AMC slightly to the right to compensate. If I'm getting dominated in midfield in games, and having a hard time getting the turnovers I want, I ask one of my strikers and/or my AMRC to man mark the opponents DMC and any playmaking MC.

Against weaker teams I have had success playing David Turnbull as a DLP on the right CM position, but you will struggle to get good turnovers against good teams. It will help getting better balls behind their defence though. 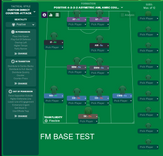