This is an attacking 3-4-3 tactic inspired by Favre's Dortmund, Gasperini's Atalanta and Pep's Barcelona. The beauty of it comes from having almost equal number of players on both end of the pitch, allowing very quick transitions and matches full of action.

I love watching 3-4-3 irl, but I found that regular 3-4-3 formation ends up very flat in FM. Many players standing in a line and we lack progressive pass options. The answer to that is to create asymmetry. It starts with the AML-Raumdeuter. He creates the width and cut-inside option for the attack. To decrease the overlap in their spaces, I chose a LB-Wing back. On the other wing, there is one RWB-Wing back who is going up and down the field. To help him out, I chose MCR-Mezzala to occupy the half space and a shorter pass option. SCR occupies the half space ahead of him. That creates the need for a holding midfielder, who is MCL-DLP. There is no vertical movement option in FM from the defense except for SW-Libero, so I went with that. That adds another central pass option to recycle possession in the attacks with his runs forward, just like Busquets role for Pep. That helps turn the initial attacking shape to a 4-3-3 where Libero is like a WB. That develops into a 3-2-5 as we push the opposition into their penalty area. In defence, we keep 3-4-1-2 shape where Raumdeuter offers a shorter pass option If pushed, that quickly turns into 5-3-2 which is damn hard to break. The key in this tactic is is the amount of diagonal pass options created through the roles and asymmetry. It is fun to watch the team make progressive passes one after another. In the end, the results were so fantastic that I had to share this tactic already. 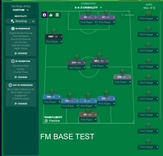