It's a 4411 tested with Udinese, no transfers, holiday mode but I used the editor at the start to get rid of injuries, bans, max cohesion, etc. AssMan does training and OIs. PF can be changed to AF with little disruption to tactic.

Media prediction was 15th, end up in 5th. Missed 4th on goal difference by 1 goal.

The point of the tactic is to provide a solid structure and try to grind out 1-0s, 2-1s and maybe sneak a draw against the big boys. Essentially, just trying to keep putting points on the board as often as possible, even if it's often just 1 point. Tactic works best with underdog teams where you're not expected to dominate the opponent, can struggle in the cup against considerable weaker teams.

Adjustmenst to make Against Weaker Teams: Set to balanced, cm(su) -> BBM, right fb(d) -> fb(su) Against much stronger teams: cm(su) -> BWM (su) but use a very physical player to try and break up the opponents play.

For me, I just find the lack of defensive tactics a little dissappointing so I've tried to make one that's a decent start. Feel free to edit it a bit and improve and post it back here. 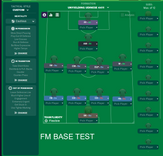