As someone pretty new to football, I have minimal tactical knowledge. Because of this, I built up my FM tactics using a combination of what worked best for the players at my team, along with the tactical ideas I picked up through my time playing water polo. Attacking focused but patiently looking for opportunities to move the ball up the pitch into better attacking opportunities. Passing often, and having players distributed all over in order to keep passing short and minimizing the length and number of dribbles.

This tactic and its slight variations has suited me quite well as I took QPR up into the European places in the Premier League, so I'd imagine it works well against stronger teams. I have noticed that my team tends to get early leads and perhaps lose them over a course of a match, so if you were considering using such a tactic as an underdog team, you perhaps should switch to a tactic that is less attacking-focused once you get an early goal or two in order to protect your lead. 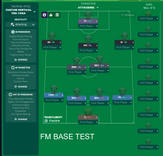