A tactic based on conjsting the midfield so encourage shor passing and through balls by the bbm and the AP!

Short Passing and Low Tempo (Inspired by the Bayern of Guardiola) it tends to have a playmaker in the BBM role. Tries Killer passes on both while the inside forwards move forward while the striker drops (Like Jurgen Klopp's Liverpool) as attacking outlets.

It might not be the best tactic, but I had some beautiful combination football with it, which makes it more of a tactic for big teams rather than underdogs.

Results come from my first year with FC Dordrecht, who were predicted 16th of the 18th, but there has been a lot of man management and the tactic hasnt been used for all games.

Hopefully it would bring some luck to the users. 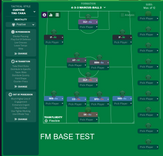