This was a formation I began to use with Atalanta who had previously managed their all time high position of 4th place and Champions League football. Almost immediately the performances improved and Serie A became fairly easy. After 1st season I won the league 3 years in a row (Averaging 92 points, 3 losses, 74GD and over 100 goals in each season).

It is a possession heavy formation and is particularly good in Serie A as many teams play with 5 at the back, allowing the wingers in this tactic to push them back and dominating the midfield. Conversely, it can be quite weak in this situation as many teams also play with 2 strikers, and with a long ball forward, this tactic occasionally is left with a 2 on 2 with my two BPDs. Main source of goals conceded is through this route. As a result, CB's with good heading, height, jumping reach, strength and pace is advised - allowing them to cover for the WBs suitably.

I have no specific player instructions, although if I am anticipating being the weaker team in a game, I sometimes change the roles of full backs and midfielders to ensure they fulfil more defensive responsibilities and sometimes ask the wing back to stay deeper and man mark the opposing wingers. The main source of goals comes from the PF(A) position, with Calvert Lewin scoring (averaging 40 goals in all competitions per year for the past 3 years). The AM(A) is also a big source of goals, followed by the IF(A) role on the left wing. It is important to have strong attacking attributes in these 3 positions. Alejandro Gomez who was at Atalanta to begin with has a near perfect AM(A) profile for this tactic. It is alos important but not vital to have opposite feet for the wide men. Left (IF) should be right footed and right (IW) should be left footed.

Good crossing attributes is also important for the wing backs and complementary heading attributes on the PF(A) are also ideal. Calvert Lewin is perfect for this and many of his goals come from set pieces.

As shown, I have been able to sign a lot of the world's best wonderkids and as such have been playing less and less (Foden, Pedri, Camavinga, Gravenberch, Camavinga, Mendes, Todibo, Aarons.

I tend not to do so well when it comes to two legged European ties in the latter stages of the Champions League, so this may be less appropriate for big games but I have regularly gone on long runs without conceding so defensively this tends to be sound. 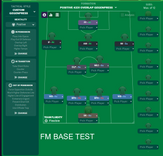