I do not claim to have created this tactic (just a subtle tweak) but I really wanted to share the results I have had with it so far and if you're looking for a tactic that is a little different from normal.

The link for the original creator's tactic is here: https://www.fmscout.com/c-fm21-tactics.html?id=7441

I have also attached the tactic with my slight alteration but don't want to take any credit away from the original tactic creator.

This tactic was been amazing for me (only changing the central defender to BPD). First season with Red Star Belgrade and I'm top at the end of March - P28 W26 D2 L0 socring 95 goals and conceding 14. And if you're thinking that's just because I'm in the Serbian league, I'm also in the Champions League quarter final getting through a group containing Juventus and Chelsea and beat RB Leipzig in the last 16!

I also haven't made any signing except bringing the man Matias Arezo in January.

Well worth giving a go! 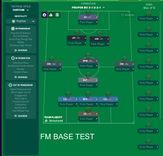