A very attacking style where it was more common to win 5-3 then 1-0. In my experience not many draws.

When playing with a CanPL I won almost every trophy (lost on penalties in N.A. champs league final to a mexican side)

Depending on your team and preference you can change:

SK support or attack role CB's to BPD on defend role DLP to a HB, BWM or Anchor Man - always on defend role AP or BBM on support role IF or IW - role set to attack DLF or AF or any other attacking role 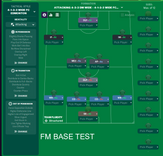