Adapted 424 for latest engine, taking inspiration from some successful tactics on this forum from last engine as a base template. On newest engine I was finding the better 424s a bit more inconsistent.

Changes I have found helps tactics on this engine compared to last:

I am currently playing in 2028 with Villa (started with Dundee Utd and moved to Villa 1 season ago). Team is reasonably weak in comparison to the rest of the leagu, some wonderkids and some journey men. I would imagine this will be very strong with top teams. 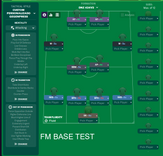