After a catastrophic start to the first season (just like in real life) I managed to comne sixth with Schalke using this tactic, was then in the race to win the title in the second season until an injury crisis hit where I had to switch around a few things. This is my go-to tactic though. It´s very prolific in attack but can be rather open in defense. It fits perfectly to my players and I bought quite fitting players. My main starting lineup ist Thomas Strakosha, Pervis Estupinan, Matthias Ginter, Benjamin Stambouli, Nico Elvedi, Suat Serdar, Sandro Tonali, Timothy Weah, Jean Pyerre/ Kang-In Lee (depending who is fit), Thiago Almada and up front Lukas Nmecha. It is simply so fun to wtch the games and the fans also love the tactic. 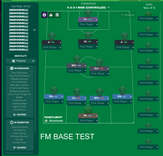