Used during a demo save with Bologna. Despite the mess that the squad is in terms of depth, the team is sitting in 3rd place in the league. It uses one of my favourite formations in the 4-1-4-1 DM Flat, even though it's a bit difficult to get counter-pressing going on with wingers sitting in the ML/R strata instead of the AML/R strata. I was inspired by "Ö-zil to the Arsenal!" tactics for FM16 on the SI forum, creating a simple, modern 4-1-4-1.

The mixed approach is there to ensure that I don't require specific players to get an above average performance as I tend to be the kind of manager who fits players into tactics rather than the opposite. The lack of any "ball magnet" role such as playmakers or target-men also makes the team less reliant on the flair of a single player to unlock the situation. It also means that the ball tends to travel more to the wings and less through the middle of the pitch though, so the wingers need to actually not be shameful at dribbling and scoring. 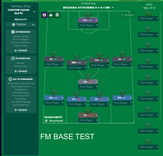