Tactic Started as @fmwynter South Star Bent Out of Shape Part Four - The South Star | From The Cheap Seats (fmcheapseats.com)

GK - SK-A - good pace, positioning, one on ones Full backs - good going forward as will be on overlap in space and take on defenders before crossing. Tend to be main creators of Side. Good pace required as sweep lots of balls in behind wide areas. Avoid Small players as lots of direct passes hit toward them. CB - Plays as a sweeper so good pace required HBs - tall players who sit in front of sweeper and recycle possession and protect against counter Midfield two - Good work rate and passing as required to cover ground, win ball back and create with balls to striker or overlapping full backs/ DLF/F9 - drop into space and help create and keep possession before running into box. AFs - good pace and preferably good height/aerial ability to run into channels and win headers from crosses.

Has not been tested but used for half a season in my Auxerre save and am unbeaten after 24 games. Tends to score a lot but will concede a fair bit. Feel free to tweak and test as you please. 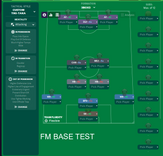