An attempt to recreate the formation the Aus nat team used in the 2006 World Cup, the most successful run Australia has had at the World Cup.

Utilizing a 3-6-1 formation with 3 cbs, 2 wbs, 4 mfs and a lone striker the formation was definitely out of the ordinary. Tactically the team lined up as a mostly defensive possession based unit averaging around 56% possession against Japan, Croatia and Italy. Fluidity in possession and passing options being one of the formations stronger traits.

It was hard to nail down exactly what roles each player contributed to the team, especially the 3 AMs, and a bit of guess work was used based on how often each player got into the box and their movement, admittedly from my memory. In the end the roles came out to this;

4mfs - Firstly the lone cm playing a more traditional mf role (Vince Grella) with the ams being two aggressive attackers, shadow striker to the left and AM on attack duty centrally (Harry Kewell and Timmy Cahill respectively) with a third, more creative am on the right (Jason Culina)

This tactic is more of a chance to see how such a formation would end up in the fm engine and a chance for me to talk about my Nations best ever National team. I also am pretty sure this tactic wont translate well to fm from the few tests ive done but i think it still has some merit as a fun and unusual tactic, especially for Australians that remember 06 world cup and hey maybe its better than it first appears.

I will probably update it further in the future to maybe make it more viable as a tactic but this version is trying to emulate that particular team and if anyone has some suggestions for making it more accurate id love to hear it. 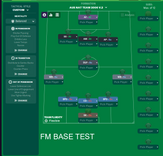