A counter attacking tactic that might win a by lot or lose by a lot.

It uses inverted wingers and inverted wingbacks but does not focus on playing down the middle because for some reason when I had it turned on the teams played worst.

The one BPD its on cover, as it makes him drop further down the line to catch any strikers counter attacking you

BBM need to have TONS of stamina as the BPD

So far this tactic got me promoted to first division on the Chilean league on one season an then got me into the libertadores cup where We got to semis. Then, saved Gazelec FC from national relegation to top of the national in a year. 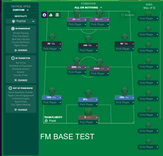