Not my tactic, I was playing around with this on FM20 and brought it with me to FM 21. It has done well for me so I wanted to see how it stood up the other tactics

The tactic aims to play a possession game full of short intricate passes alongside intelligent movement from players to wreak havoc in the final third. With no recognized out and out striker, the opponent's defense needs to either step out playing a higher line which leaves room in behind for the Shadow Strikers to exploit. Or if they hold a standard line they leave space and time for the forwards to play in between the lines. Description as posted by Boroboy116 on FMscout 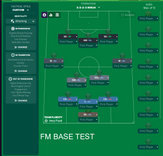