This tactic was created to simulate real life Liverpool under Klopp.

So the idea is that opposing defenders have to make a decision, deal with players trying to overlap with runs into the box or rush out to press the l/r wb's. The IF's and the two BBM's are set to move into channels and run with ball so there is a possibility for a overlap and throuh ball scenarios, while the l/r wb's will come down the flanks ready to swing inn a cross. When a defender try to close down our wb this leaves space for other players to take advantage of.

Front three will score most of your goals, if you change the CF position to attacking role this position will get more/'or most' goals over the course of the season. I've tried changing the center striker to CFA, PFA and AF and all work well with this tactic. However i wanted to keep him in a support role, having Firminio in mind. As you can see the l/rwb are an important attacking tool, in 20 out of all 38 games, Robertson or Alexander-Arnold was the motm.

Corner setup is just ripped from Knap's tactics as these seem to work good enough. I set my l/r wb and cml to take corners, this way no other players are drawn out of their position.

Shouldn't get too many cards, but if you happen to get a man sent off i would recommend taking the half back (dmc) off the pitch. This would for the most part just make you a little more vulnerable i defence. Ended up in the "quiet and leaky" box, but that's fine as long as you don't allow a lot of goals anyway :p 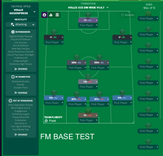